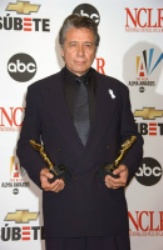 Edward James Olmos (b. Los Angeles 1947) is an Emmy-winning Mexican-American[1] actor and director. One of his most memorable roles is Lt. Martin Castillo in Miami Vice.

He received an Academy Award nomination for "best actor" for his starring role in Stand and Deliver (1988). Most notable of his recent offerings is American Me (1992), which was also his directing debut. But acting, directing and screenwriting are only parts of what he does. Olmos contends he would much rather be known as an activist than an actor. He devotes much of his time to causes, particularly those focusing on the needs and rights of children. He makes, on average, some 150 personal appearances a year to places where he can reach kids at risk; juvenile halls, detention centers, boys/girls clubs, schools. Anywhere he can get across his message that "we all have a choice" about where life takes us. He stresses the importance of education, the risks of gang life and tries to promote the notion of taking responsibility for one's own actions and one's own happiness in life. [2]