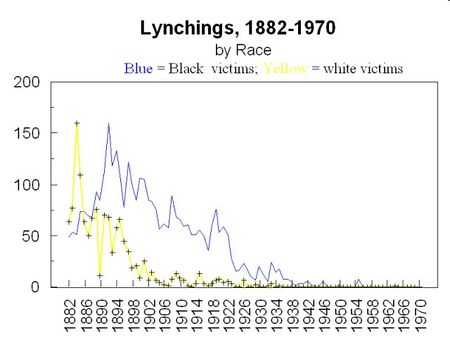 The first victims (yellow line) were Republican carpetbaggers; once they were driven out the Democrats turned on Blacks (blue line).
Source: Historical Statistics of the U.S., and is based on the 1952 Negro year Book.

The Dunning School was an informal group of American historians at Columbia University who studied the South during Reconstruction. Historian William Archibald Dunning directed many of the Ph.D. dissertations and wrote monographs and a survey.

They began the serious study of the era, and blamed the failures of the era on the corruption of Carpetbaggers who misled the Freedmen and not Klan violence against carpetbaggers.

The Civil Rights Movement of the 1960s brought in a new perspective called "neoabolitionism". It used the same facts but stressed the agency of the blacks and downplayed corruption. Some of the new liberal historians ridiculed the biases of the Dunning School without realizing that their own biases were even stronger. The study attempted to blame Republicans and exonerate Democrats while maintaining the Democrat terrorist wing, the Ku Klux Klan, acted benignly.