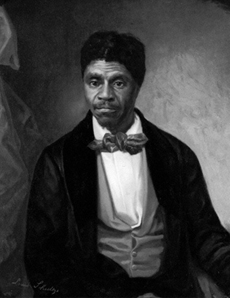 In 1846, a slave named Dred Scott and his wife, Harriet, sued for their freedom in a St. Louis city court. The odds were in their favor: they had lived with their owner, an army surgeon, at Fort Snelling, then in the free Territory of Wisconsin. However, what appeared to be a straightforward lawsuit between two private parties became an 11-year legal struggle that culminated in one of the most notorious decisions ever issued by the United States Supreme Court.

In the early 1830s, a slave named Dred Scott was sold by Peter Blow (or the executor of his estate; records are unclear) to Dr. John Emerson, who had recently obtained a commission as surgeon in the U. S. Army at Fort Armstrong, Illinois. Emerson took Scott with him as a slave. After three years (during which Emerson had repeatedly petitioned the War Department for a transfer), Emerson was transferred to Fort Snelling, located near the present site of St. Paul, Minnesota. While there, Scott married (with both owners' permission), Harriet Robinson, a slave of Major Taliaferro.

The next year, Emerson was transferred to Fort Jesup, in Louisiana. He left Scott and Harriet at Fort Snelling for a time; later they followed him downriver. Around this time, Emerson complained to the War Department, "One of my negros in Saint Louis... sued me for his freedom." However, no other records of this suit survive.

Emerson was later transferred back to Ft. Snelling, and Harriet gave birth to a baby en route, in the free territory of Iowa. After several other transfers, the War Department (tiring of his frequent petitions for transfer) discharged him from the army. He died soon afterward, leaving his slaves to his widow and naming John F. A. Sanford (his brother-in-law) as one of his executors.

Little is known about Scott himself, who died in 1858 shortly after his suit was dismissed by the Supreme Court. Despite rumors of his "shiftless"ness, Scott was described as "illiterate but not ignorant" and possessed of a "strong common sense."

Scott unsuccessfully tried to purchase his and his family's freedom from Mrs. Emerson shortly after her husband's death. When this offer was rejected, he (and his wife, whose suit parallelled his in all respects) sued for their freedom in the Missouri state court, saying that their master had brought them to free soil and they had lived their for extended periods. Frequently, courts in Missouri and other slave states had held that slaves who had lived in a free state with their master's consent (rather than having run away or just visited there for a time) had become free and remained free even after returning to a slave state. The first trial failed on a technicality (Scott's lawyer failed to prove that Mrs. Emerson truly claimed to be his owner), but a second trial resulted in Scott's being freed on these grounds. However, Mrs. Emerson appealed to the Missouri Supreme Court.

On its way to the Supreme Court, the Dred Scott case grew in scope and significance as slavery became the single most explosive issue in American politics. By the time the case reached the high court, it had come to have enormous political implications for the entire nation. The sectional controversy over slavery had grown to the point where the Northern and Southern wings of the Democratic Party could only agree on giving the territorial governments all Constitutional power over slavery - but they could not agree on what powers they could Constitutionally have, and only achieved a fragile truce by agreeing to leave the matter up to the Supreme Court.

Into this climate came the Dred Scott case. The Supreme Court heard the first oral arguments in February 1856, but later called for a re-hearing in December. On March 6, 1857, two days after the inauguration of President James Buchanan, the Court voted 7-2 against Scott (60 U.S. 393). While all nine justices wrote separate opinions, Chief Justice Roger B. Taney wrote the officially-designated "opinion of the court". The two dissenters were John McLean and Benjamin Robbins Curtis.

The Republican Party quickly protested the decision, saying that most of Taney's opinion was obitur dicta and therefore void - after ruling that Scott had no right to sue, he should have ended his opinion there. Abraham Lincoln argued that the Dred Scott case was part of a pro-slavery conspiracy: the reasoning Taney had used to force slavery upon the territories would allow a future court to force slavery upon Northern states.[4] Many Northern states also protested the decision by effectively nullifying parts of it within their state bounds.

Thus, the North began to feel threatened by the South. Similarly, the South began to conclude that no governmental action could assure them of their rights against Northern opposition. This decision moved the nation a step closer to Civil War.

Lincoln argued that, while the decision was valid for Scott himself, the government did not need to follow Taney's larger conclusions:

...if the policy of the government upon vital questions, affecting the whole people, is to be irrevocably fixed by decisions of the Supreme Court, the instant they are made, in ordinary litigation between parties, in personal actions, the people will have ceased to be their own rulers, having to that extent practically resigned their government into the hands of that eminent tribunal.[5]

In accordance with this, the Republican-controlled Congress abolished slavery in all Federal territories without once mentioning the Dred Scott decision.

The main points of the decision were officially overturned by the 13th and 14th amendments to the Constitution, which abolished slavery and declared all persons born in the United States to be citizens of the United States.

In the Insular Cases of 1901, which concerned the Constitution's application in Puerto Rico (recently seized in the Spanish-American War), Justice Henry Brown acknowledged that the Dred Scott decision

is a strong authority in favor of the plaintiff, and if the opinion of the Chief Justice be taken at its full value it is decisive in his favor. We are not, however, bound to overlook the fact, that, before the Chief Justice gave utterance to his opinion upon the merits, he had already disposed of the case adversely to the plaintiff upon the question of jurisdiction, and that, in view of the excited political condition of the country at the time, it is unfortunate that he felt compelled to discuss the question upon the merits, particularly so in view of the fact that it involved a ruling that an act of Congress which had been acquiesced in for thirty years was declared unconstitutional. It would appear from the opinion of Mr. Justice Wayne that the real reason for discussing these constitutional questions was that 'there had become such a difference of opinion' about them 'that the peace and harmony of the country required the settlement of them by judicial decision.' The attempt was not successful. It is sufficient to say that the country did not acquiesce in the opinion, and that the Civil War, which shortly thereafter followed, produced such changes in judicial, as well as public, sentiment as to seriously impair the authority of this case.[6]

The one point still cited with favor today is Taney's technical discussion of a plea in averment. Besides that, the Dred Scott case has become a byword for unjust decisions.