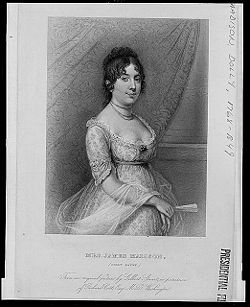 Dolley Madison or Dolly Madison (born Dolley Payne) lived from 1768 - 1849. She was the wife of President James Madison from 1794 until his death, and served as First Lady of the United States from 1809 to 1817. She came from a Quaker background and was the widow of John Todd. She is famous for having saved a portrait of George Washington from the White House before it was burned by the British army during the War of 1812 and was known as a lavish and charming hostess when her husband was Secretary of State (1801-1809) and President (1809-1817).

She cut as attractive and vivacious a figure as James Madison did a sickly and anti-social one. Dolley is largely credited with inventing the role of First Lady as political ally and adviser to the president. They had no children.