Deval Patrick is the former governor of the Commonwealth of Massachusetts, the first African American to hold that post, and a politician interested in running for the nomination of the Democrat Party for president in 2020. 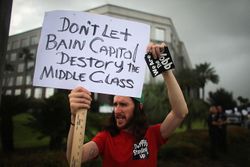 The party’s insiders would have better luck finding a winning general election candidate if they randomly plucked an auto mechanic from Lansing, Michigan, or a nail salon owner from Vegas, or any of a thousand schoolteachers who could use the six months of better-paid work, than they would backing yet another in the seemingly endless parade of corporate-friendly “Goldilocks solutions.” That’s assuming they can’t see past themselves long enough to at least pretend they can support someone with wide support bases like Sanders or Warren. If what the Times calls the “Anxious Democratic Establishment” remains stuck in the same doomed, outmoded “centrist” strategy, next year’s general election season will almost certainly be a miserable repeat of 2016. It seems like everyone sees this but the people with the most money to fund challenges to Trump. Watching people like Patrick talk themselves into running into the populist wood-chipper is a cringe-worthy spectacle.[1]

His problem is a weak performance as governor, dashing the expectations of the fervent supporters who saw Patrick as the charismatic breakthrough after so many GOP governors. But only 39% approved of Patrick's performance as governor, and only 7% who strongly approved. Sixty percent (60%) disapproved of the job he is doing, including 34% who strongly disapproved. Patrick was unable to convince the legislature to adopt his main recommendations. Most voters believe he has failed to bring the changes he promised—though he did bring higher taxes—and are going back to the policy of having a Republican governor as a counterweight to the Democratic state legislature.

In late 2012, when hurricane Sandy hit the East coast, New Jersey took the brunt of the storm. Gov. Patrick deployed hundreds of National Guard troops to help with preparations.[2]

He attended Harvard College and graduated in 1978. For a year after his graduation he worked with a United Nations program in Darfur, Sudan. He returned to Boston in 1980 to attend Harvard Law School. In 1994, he was appointed to the position of Assistant Attorney General for Civil Rights by then president, Bill Clinton. While working for the Justice Department, he was part of one of the largest, pre September 11, criminal investigation of church burnings in the South. In 1997 he returned to life as a private citizen and worked for company's such as Coca-Cola (Executive Vice President and General Counsel), Texaco (chairperson for the Equality and Fairness Task Force) and a law firm (Day, Berry & Howard).[3]

Deval Patrick, responding to a discussion about Glenn Beck's Restoring Honor rally, said the following about the United States of America: "It's a free country. I wish it weren't."[5]