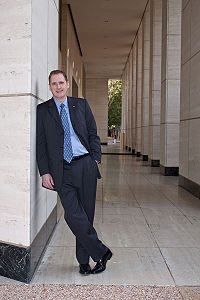 Chuck DeVore
Charles S. "Chuck" DeVore (born May 20, 1962 in Seattle, Washington) is a Lieutenant Colonel in the U.S. Army retired Reserve and member of the California State Assembly. He was a candidate for the Republican nomination to challenge Barbara Boxer for U.S. Senate in the 2010 election, however finished third behind former Hewlett-Packard CEO Carly Fiorina and former Congressman Tom Campbell.

DeVore served as a Special Assistant for Foreign Affairs in the Department of Defense in the Reagan administration and went on to become a senior assistant to Republican Congressman Christopher Cox. In 1990, DeVore was elected City Commissioner for the City of Irvine and was an elected member of Republican Party Central Committee of Orange County from 1993 to 2003.

DeVore was elected to the California Assembly in 2004, representing a constituency of 500,000 people in Orange County. He currently serves as Vice Chairman of the Assembly Committee on Revenue and Taxation and serves on the Veterans Affairs Committee, and the Joint Legislative Audit Committee. DeVore was reelected in 2006 and 2008.