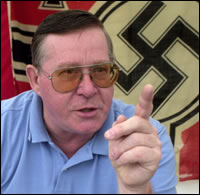 Leading Christian Identity pastor James Wickstrom: "The only way to totally eliminate racial strife in the United States and throughout the world is to bury every Jew on earth."

Christian Identity is a white supremacist movement which asserts that the "Aryan", or white people of European descent, are the descendants of the Lost Tribes of Israel of the Bible, and that the Jews are not, but are rather the offspring of Satan. They believe that while Adam and Eve were white people created in the image of God, non-white people ("mud people") were created separately from whites, and they generally assert that salvation is only available to white people. While they claim Christianity as their religion, the Christian community rejects their claim and find their position to be abhorrent and at odds with Christian beliefs. Christian Identity groups or churches can be found in virtually every region of the United States, although they are small in number, having between 2,000 to 50,000 adherents. It has also engaged in criminal behavior ranging from hate crimes to acts of terrorism.

The religion grew from British-Israelism and moved to the United States in the 1930s, becoming increasingly anti-Semitic under the leadership of Wesley Swift who founded the Church of Jesus Christ Christian. Within Christian Identity some adherents believe in Swift's "two-seed" theory that the seduction of Eve by the Serpent was sexual, resulting in the conception of Cain who was the father of the Jewish people; thus all Jews are descendants of the devil. Some Identity adherents assert a "one-seed" theory. The religion also incorporates millennialism or the belief that the world is in its final days.

Many Identity adherents believe Jews, blacks, communists, homosexuals and race-traitors have seized control of the United States. They refer to Washington, D.C. as the Zionist Occupational Government (ZOG). The novel "The Turner Diaries" in which an underground white army leads a revolution against ZOG is popular among them.

Not all Ku Klux Klan groups adhere entirely to Christian Identity, but those that do call themselves the Fifth Era Klan, which was introduced to mark what they hoped would be the fifth period of growth by the Klan since its inception.

On the Jews as "a mongrel blood race" Wickstrom states:

And it is proven fact, that the jews and Whites are of a different race. It also shows in itself as to how the jews have financed the Blacks, who were unknowing of the jews plan to use them against the Whites. The jews are of Asiatic blood. They are a mongrel blood race, whose desire is to destroy all pure races on this earth using racial mongrelization (diversity and pluralism), mainly against the White race, the Black race, and the Oriental Race.

Wickstrom advocates the mass killing of Jewish people: the Southern Poverty Law Center cited an interview[1] with Wickstrom in which he proposed giving Jewish people "the holocaust they rightly deserve:"

I'd like to see these Jews all be brought to the VA [Veterans Administration hospital] and wooden chairs be put down on the lawn. Tie the Jews in. Bring these veterans down who have been mutilated, physically mutilated, their lives ruined without the opportunity of a family or children, and give them baseball bats and let them beat these Jews to death! Every one of them! Take these chairs and Jews after they're beaten to death, throw 'em in the wood chipper! And from the wood chipper let the remains go into a big incinerary truck, which is right behind the wood chipper, and give them the holocaust they rightly deserve!

In North Dakota in 1983, Identity believer Gordon Kahl killed two U.S. Marshals who had come to arrest him for a parole violation. A four-month manhunt ended in another shootout in Arkansas, where Kahl killed a local sheriff before he himself was killed.

The same year, the white supremacist terrorist group known as The Order began a series of armed robberies, murders and counterfeiting operations. Several members of the gang belonged to Christian Identity, including David Tate, who in 1985 killed a Missouri State Highway Patrol officer attempting to reach an Identity survivalist compound called The Covenant, the Sword, and the Arm of the Lord (CSA). An ensuing standoff resulted in the demise of the CSA and the arrest of its leadership. Subsequently, several Christian Identity groups attempted to follow in the footsteps of The Order, including The Order II and the Arizona Patriots, who committed bombings and an attempted armored car robbery, respectively.

In the 1990s, Christian Identity criminal activity included efforts by an Oklahoma Identity minister, Willie Ray Lampley, to commit a series of bombings in the summer of 1995 in the wake of the Oklahoma City bombing by Timothy McVeigh. The following year, the Montana Freemen, whose leaders were Identity, made headlines for their "paper terrorism" tactics and their 81-day standoff with the federal government. In 1998, Eric Rudolph, who had been associated with Identity ministers such as Nord Davis and Dan Gayman, became a fugitive after bombing gay bars, the Atlanta Summer Olympics, and an abortion clinic. The following year, Buford Furrow went on a shooting spree at a Jewish Community Center in Los Angeles, wounding four children and an adult, and later killing a Filipino-American postal worker

Another example of Christian Identity terrorism can be found in the concept of the Phineas Priesthood, set forth by Richard Kelly Hoskins in his 1990 book Vigilantes of Christendom. The Priesthood is based on the concept of the obscure Biblical character Phinehas, an Israelite who used a spear to slay a "race-mixing" fellow Israelite and the Midianite woman with whom he had sex. Hoskins conjured up the idea of an elite class of "Phineas Priests," self-anointed warriors who would use extreme measures to attack race-mixers, gays, or abortionists, among other targets. Over the years, some have committed crimes using the Phineas Priest label, including a group of about eight who committed bombings and bank robberies in the Spokane, Washington, area in 1996 (four of whom were caught and sentenced to lengthy prison terms). In 2002, two Aryan Nations splinter groups openly adopted Phineas Priest names or symbols.[2]