Christopher Brian McDaniel, known as Chris McDaniel (born June 28, 1972), is a second-term member of the Mississippi state senate, who ran for the Republican nomination for the United States Senate in 2014 against an entrenched incumbent, Thad Cochran. This was the highest profile challenge to an incumbent senator in the nation that year. He is again seeking the Cochran seat in a special election in 2018.

He was born on in Laurel, Mississippi,[1] to Carlos and Charlotte McDaniel. His father died in a car crash in 1999.[2] 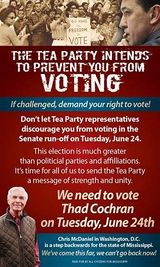 This ad was paid for by republicans[3][4]

In 2014, McDaniel won on the primary election day but, because of a third candidate, did not attain 50 percent of the vote. In the subsequent run-off, many traditional Democrats reportedly participated in the Republican primary for the benefit of Cochran, and on that basis he narrowly defeated McDaniel.

At a press conference announcing his legal challenge to the primary results, McDaniel said that the GOP is "a party that does not need to play the race card to win."[5] Several ads, such as the one seen here, used phrases such as "The Tea Party intends to prevent you from voting". John Fund, a frequent contributor to The Wall Street Journal asked if this similar[6] ad was the flier that got Cochran elected. The ad read "The Tea Party intends to prevent blacks from voting on Tuesday".[7][8]

He currently represents District 42, which encompasses Forrest and Jones counties.[1]

McDaniel is a candidate in the special election scheduled for November 6, 2018, to fill the twenty-six months remaining in Cochran's term. After Cochran announced that he will, as of April 1, leave his seat for health reasons after more than thirty-nine years in the office, Republican Governor Phil Bryant by-passed McDaniel and appointed a former Democrat, Cindy Hyde-Smith, the state agricultural and commerce commissioner, to hold the seat until the special election. In a statement, McDaniel said that he was:

troubled to learn that Mississippi Governor Phil Bryant dutifully followed the orders of the Washington establishment’s Mitch McConnell by appointing Cindy Hyde-Smith to fill the temporary vacancy created by Senator Thad Cochran’s retirement. . . . the last thing the state of Mississippi needs in Washington is another moderate Democrat. ...


The establishment should have learned [its] lesson in Alabama. By spending millions of dollars against conservative Mo Brooks, they ended up losing the seat (with Roy Moore) to a Democrat (Doug Jones). Now, they are going to appoint one in Mississippi. Instead of unifying around my candidacy, and beating the Democrats, the establishment is once again going to waste millions of dollars of donors’ money over what should have been a safe Republican seat in Mississippi.[9]

Some strategists question whether Hyde-Smith's former ties to the Democrats could hurt her chances in a race against McDaniel. The special election will be essentially non-partisan; each party will not be selecting nominees to contest the race. U.S. President Donald Trump has campaigned in Mississippi on behalf of Hyde-Smith. Polls show Hyde-Smith headed to a December runoff contest with either McDaniel or the popular Democratic nominee, Mike Espy, an African-American liberal Democratic former member of the United States House of Representatives who served briefly as United States Secretary of Agriculture under former U.S. President Bill Clinton.

At the same time as the special election, RINO Senator Roger Wicker will seek reelection to a full term. McDaniel had first announced that he was challenging Wicker but then switched to campaign for the seat vacated by Cochran.

In addition to Hyde-Smith and McDaniel, a third major senatorial candidate is Mike Espy, an African-American liberal Democratic former member of the United States House of Representatives who served briefly as United States Secretary of Agriculture under President Bill Clinton.

Together with his wife, the former Jill Tullos, the McDaniels have two sons.[11] Mrs. McDaniel was the 1995 "Miss Mississippi USA".[12]