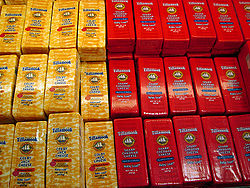 Cheese is a solidified dairy product. Cheese making starts with the solidification of milk proteins, usually by the addition of rennet (a mixture of enzymes) or an edible acid, which produces curds. For most types of cheese, the curds are separated from the liquid, the whey, and then aged, sometimes for many years. Salt is also often an ingredient in cheese recipes.

Most cheese is made from cow's milk, although technically, any large mammal's milk can be used. Some common sources of milk for making cheese other than cows include:

France is especially renowned as a cheese producer, and their president Charles de Gaulle famously said : "How can a country with 300 different kinds of cheese agree on anything?". Many cheeses are made from unpasteurized milk and their import into the USA forbidden for health reasons owing to potentially toxic bacterium listeria. Physicians recommend that the cheeses should not be consumed by pregnant women or young children. Certain French cheeses (such as Epoisses) are so smelly to keep up the urban legend that their carriage is banned even on French public transport.

It is most likely that the invention of cheesemaking was a way of preserving excess milk for leaner times.

There are literally thousands of varieties of cheese made in the world today. The best selection with more than thousand varieties is offered in the Kaufhaus des Westen, Berlin, Germany [1]. Some well known varieties are:

Head cheese, known as brawn in the UK and by other names in other parts of the world, is made from meat taken from the head of an animal – pigs, calves and cows are used – that might otherwise remain uneaten for aesthetic reasons. It sometimes includes meat from other normally unappetizing areas such as the feet or organs. The meat is chopped or shredded and set in gelatine. It is usually eaten cold or at room temperature as a luncheon meat. In the southern states of the US this is sometimes also known as sousemeat and pickled in vinegar.

Lemon cheese is another name for lemon curd in the UK. Fruit cheeses are sometimes made with other citrus fruit.

In England, the traditional sport of cheese-rolling remains locally popular. [2]

James McIntyre, a Canadian poet, was fond of writing poems and odes to cheese. This is not because he thought the subject was funny, or ironic. Rather, McIntyre saw cheese production in Canada as a symbol of the strong growth in the Canadian economy. Many people today find his works quite humorous, but McIntyre's "Ode on the Mammoth Cheese" is considered by most poetry scholars not only his best work, but his ultimate achievement.

The original family name of comedian John Cleese was Cheese, but was changed to Cleese by his father. Cleese is famous, of course, for playing the frustrated customer in the Cheese Shop sketch on the Monty Python's Flying Circus television show.

Cheese is considered by some as a palliative for various internal diseases.

In the animated series Wallace and Gromit, cheese plays an important role. Not only is Wensleydale cheese their favorite variety but in A Grand Day Out they visit the moon because it is made of cheese.