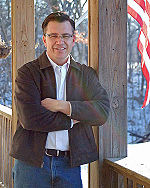 Bobby Schilling is the Republican U.S. Representative-elect from Illinois's 17th District, defeating liberal Phil Hare. Schilling is a business man that owns a pizzaria. Previous employment includes Container Corporation of America and Prudential Financial insurance company. He is a Pro-life, pro-Second Amendment conservative looking to cut government budget deficits and taxes. Schilling has the support of the Tea Party Movement and was named one of the GOP's "Young Guns." He has been married to his wife Christie for 24 years and they have 10 children.

Schilling's opponent Phil Hare made national headlines when he spoke on camera regarding ObamaCare saying, "I don't worry about the Constitution on this to be honest." Also, he has described himself as a veteran even though he was just a reservist. Hare told Chris Matthews’ MSNBC audience he would welcome terrorists from Guantanamo Bay to Thomson, Ill.[1]

Schilling defeated Hare in the election by eleven percentage points.[2]