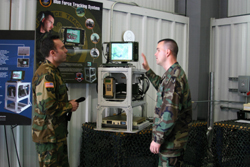 An officer explains the BFT tracking system to a fellow solider at the U.S. Army’s Alabama research center.

Blue Force Tracking (BFT) is a situational awareness capabilities system used by military forces. Military officials began to take action to curb fratricide (military term for friendly fire) after the Gulf War in Iraq. Thirty-five of the United States' 148 fatalities in the war were caused by friendly forces.

The United States began testing Blue Force Tracking in its operation in Iraq in 2003. The system showed the United States and allied forces the direct locations of where they were in relationship with each other on the battlefield. With the allied forces colored blue and enemy forces red, the computerized system gives, and continuously updates information automatically. BFT technology was also given to private security firms, such as Blackwater, USA.

At the beginning of the operation, the United States was testing many different versions of the situation awareness system. They finally decided on a system called Force XXI Battle Command, Brigade and Below System (FBCB2). The U.S forces in Iraq made the system interoperable with all its forces and British troops in Operation Enduring Freedom. Blue Force Tracking proved its ability to cut down fratricide in Iraq, and is used by US troops in Afghanistan. Recently the NATO forces in Afghanistan are combining the forces of the countries' tracking systems to achieve an interoperable, Friendly Force Tracking system.