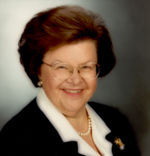 Barbara Mikulski, born July 20, 1936 (age 84), is a former United States Representative and current Democratic United States Senator from Maryland. In 1958 she received a degree from the University of Maryland School of Social Work. After graduating, she became a social worker in Baltimore and worked on the Baltimore City Council (1971-1976). Mikulski has held the position of Democratic Conference secretary since 1995.

Mikulski chaired the Democratic National Committee's Mikulski Commission in 1975 which brought about voter suppression in primary elections by requiring voter identification by party.

Mikulski is one of the most liberal Senators in congress, voting with the Democratic Party with more than 99.1% of her votes. Despite introducing no significant legislation in her Senate years, she continues to get reelected.