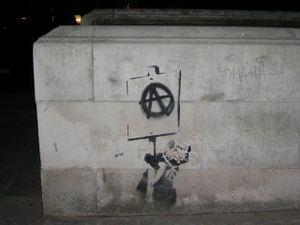 A Banksy graffiti in Sloane Square Banksy is an anarchist British street artist. He uses stencils to make graffiti pictures and goes out of his way to keep his identity secret. Banksy opposes capitalism and Israel. He supported the liberal Occupy Wall Street movement.[1]

In 2010 Banksy was invited to create a "couch gag" sequence for The Simpsons.[2] Banksy also directed the film Exit Through The Gift Shop, released in 2010.