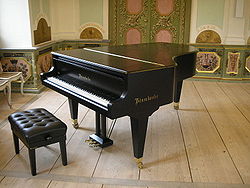 Bösendorfer is one of the oldest makers of pianos, founded in 1828 by Ignaz Bösendorfer. The company has been located in Vienna, Austria since the beginning, though the pianos are now manufactured in Wiener Neustadt, about 30 miles south of Vienna.

While not as universally popular as those produced by Steinway & Sons, Bösendorfer pianos are regarded for their unique sound, which is darker and mellower than a Steinway grand. One particular innovation of Bösendorfer pianos is the extended bass range: instead of the standard 88-keys, some models have 92 keys, and others have 97, all of the extra keys at the bass end. While piano music typically does not call for notes below the standard range, the extra strings contribute to the piano's sound through sympathetic vibration.

After a financial scandal in 2007 involving its parent company BAWAG (an Austrian bank), Bösendorfer was bought by Yamaha.

"Bösendorfer Hall," in various locations, was a famous Viennese concert venue beginning in 1872. In Spring 2010, the hall will close down due to increasing financial pressures.