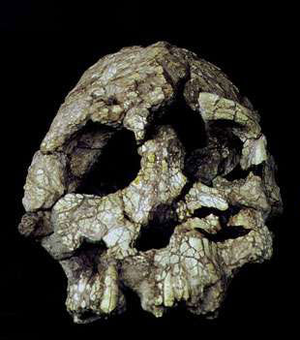 According to Evolutionists, ardipithecus ramidus is an example of the earliest known hominins, a group whose members include humans and their ancestors, which Anthropologists believe is roughly 4.4 million years old.[1]

Creation scientists disagree with this dating,[2] citing the unreliability of the methods used to arrive at such a figure.[3]

The term ramid from ramidus means "root" in Afar, an Ethiopian language. It refers to the closeness of the species to humanity. Additionally, Ardi means "ground" or floor". White coined the genus Ardipithecus to differentiate the new genus from Australopithecus.

American paleoanthropologist Tim White and his team are credited for the first Ardipithecus ramidus fossil finding. They were found in Ethiopia in the Middle Awash area between 1992 and 1994. White and his team have uncovered over 100 fossils of Ar. ramidus.[4]

According to Science magazine, ardipithecus is not the oldest putative hominin, but it is by far the most complete of the earliest specimens. The most recent find includes most of the skull and teeth, as well as the pelvis, hands, and feet, and reveal an "intermediate" form of upright walking, considered a hallmark of hominins.

Paleoanthropologist Andrew Hill of Yale University is quoted as saying, "We thought Lucy was the find of the century but, in retrospect, it isn't."[5] There is not yet a consensus on the validity concerning the ability of Ardipithecus to walk upright as some anthropologists are stating there is only circumstantial evidence for upright walking. Debate about Ardipithecus's locomotion and identity evolves but she provides the first hard evidence about the ancient hominins.[1]

According to Lovejoy, males pair-bonded or married females, showing traditional marriage is as old as 4 "million" years according to so-called evolutionary science. This finding supports the Biblical definition of marriage as being between a man and a woman— "Her children rise up and call her blessed; her husband also, and he praises her."[6]