Napoleon Bonaparte at the Bridge of Arcole, 1796.

Antoine-Jean Gros (1771 - 1835) was a French Neoclassical Romantic painter. In 1793 Gros went to Italy, where he met Napoleon and was appointed his official battle painter. He followed Napoleon on his campaigns, and his huge paintings such as The Battle of Eylau (Louvre, Paris, 1808) are among the most stirring images of the Napoleonic era. [1] 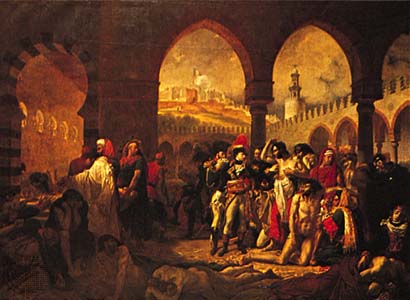 Napoleon Visiting the Pesthouse at Jaffa, Napoleon on the Battlefield of Eylau, 1808.