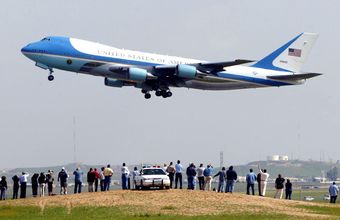 Air Force One is the air traffic control call sign of any United States Air Force aircraft carrying the President of the United States.[1] Since 1990, the presidential fleet has consisted of two specifically configured, highly customized Boeing 747-200B series aircraft – tail codes "28000" and "29000" – with Air Force designation "VC-25A". While these aircraft are referred to as "Air Force One" only while the president is on board, the term is commonly used to describe either of the two aircraft normally used and maintained by the U.S. Air Force solely for the president.

When the president needs to fly to locations that have runways too short for the VC-25A, a Boeing C-32 is used instead. An Air Force aircraft carrying the Vice President of the United States is designated as Air Force Two.

Due to high operating costs, the United States Air Force intends to replace the two current Boeing 747-200Bs with Boeing 747-8Is. The Air Force announced the plan on 28 January 2015. The U.S. Air Force projected the budget to $4 billion USD, sparking tweets from then president-elect Donald Trump to cancel the order.[2][3][4]