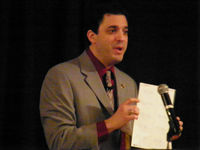 Later in 2018, Silverman was fired due to allegations of financial conflicts and sexual assault (see also: Atheism and sexism).[4] After Silverman was terminated from his job at American Atheists, The Washington Post declared concerning Silverman, "Since then, he has lost his job, longtime friends, sleep and weight."[5]