This article appears to be in clear violation of the 6th commandment. The majority of the article is unsourced opinion. He is a lawyer. For this site's sake, shouldn't more care be taken to avoid libel? Myk 15:24, 15 March 2007 (EDT)

Giuliani's sexuality is often a topic in the press and at times his sexuality is questioned. The Catholic Church annuled Giuliani's first marriage between he and his then wife, Regina Peruggi, because Giuliani discovered that they were in fact second cousins. While he and his second wife Donna Hanover were separated he moved out of Gracie Mansion and moved in with two gay friends. Guiuliani has appeared several times dressed as a woman at public events. He appeared in drag in an episode of "Queer As Folk." He also wore a blond wig and pink dress for the 1997 Inner Circle dinner in New York. He then appeared again on national television on "Saturday Night Live" cross dressing. [1]

Reply Giuliani's cross dressing is of importance to voters that might plan on choosing him as the next President, particularly if family values and moral behavior are important to you. I cited my addition as well. What is the problem with this?

We put facts, not opinions, not judgements, not gossip on these pages. TK, I copied your message to Aschlafly on to the Conservapedia:Abuse page. It'll be replied to faster there. Myk 04:01, 17 March 2007 (EDT)

None of what I added is gossip. It is a fact he was married to his second cousin. It is a fact he moved in with two of his gay friends. It is a fact he appeared on television dressed in women's clothes. And how one presents himself to the public and the world is incredibly important when serving public office.

Removed line "he was hailed around the world as "America's Mayor,"" this is an unverifiable fact. It may be a quote from a single newspaper article but hardly a consscensous from around the world.

Now it looks more like an encyclopedia article and the format is at least similar to the McCain article. It's still slightly POVish... Giuliani does have some political warts, after all but it's looking much better. Nice job with the content, TK. If you want to help, I'm going to try to do some of the other Republican candidates tomorrow (this is conservapedia after all) before moving on to the Democrats (full disclosure.. I'm a Democrat). Myk 04:26, 17 March 2007 (EDT)

"This is an encyclopedia, not the gossip columns. Ronald Reagan, Bush 41, and many others have dressed in drag for comedy skits, same as Giuliani, and it is not important to their record of public service."

I was thinking about that comment and I have to agree that this is suppose to be an encylopedia and encyclopedias do not focus on one aspect of a person's life so it would not be appropriate to limit topics on Giuliani to simply his "record of public service". So in the same way it is important to understand Reagan in the context of the Cold War it is within the scope of an encyclopedia to include the fact that he was an actor and liked jelly beans. So I am suggesting a Giuliani topic that would be "Comedy Skits" would that be more acceptable?

The entry is way too one-sided

This entry reads like a campaign brochure for Giuliani. I'm going to track down and reinsert some of the inappropriate edits that has made this so distorted.--Aschlafly 18:20, 19 March 2007 (EDT)

This is from wikipedia but would balance the entry. Alot about hie leadership after 9/11 is mentioned but this is a fair criticism:

In February 2007, the International Association of Fire Fighters issued a letter accusing Giuliani of "egregious acts" against the 343 fireman who had died in the September 11th attacks. The letter asserted that Giuliani rushed to conclude the recovery effort once gold and silver had been recovered from World Trade Center vaults and thereby prevented the remains of many victims from being recovered: "Mayor Giuliani's actions meant that fire fighters and citizens who perished would either remain buried at Ground Zero forever, with no closure for families, or be removed like garbage and deposited at the Fresh Kills Landfill," it said, adding: "Hundreds remained entombed in Ground Zero when Giuliani gave up on them." --- Eljoe

Is is fair to balance a formal complaint by a union of 280,000 firefighters with a single letter from a retired firefighter? There's more text discrediting the union (who were the real heroes of the day) than there is describing their claims. And why mention that Giuliani is trying to discredit them as partisan? It makes him look like he's playing politics with their lives. --~user:RWest 10:27 24 July 2007

Agree on the point in general about not using wikipedia, but the International Association of Fire Fighters is not a very small group of firemen. And I'll tell you, here in New York, this is a big deal. People are still finding remains down there. Myk 21:28, 19 March 2007 (EDT)

That's what journalists do, not encyclopedists. For a man whose reputation is due in large part to his dealing with 9/11, criticism from first responders is a significant deal. Myk 22:40, 19 March 2007 (EDT)

There are two issues here. One is that a very large union of firefighters is criticizing Giuliani on behalf of its members who served under him during the 9/11 terror attacks. That is news because it will impact his campaign and already did when he wasn't invited / didn't show up to address this union at an event where every major candidate was president. And yes, they are still finding remains in the ruin which verifies the claims of the firemen. Myk 23:18, 19 March 2007 (EDT)

How did I contradict myself? Encyclopedia's report facts, but I'm not going to investigate. To the best of my knowledge Giuliani's campaign had no comment on the subject. If you would like to balance the story by finding Giuliani's response to it, that will be a fine addition. But I don't feel compelled to include it. An association of firefighters is openly criticizing a presidential candidate over the very issue which is the foundation of his candidacy. That is a key constituency for him. If I had a dog in that hunt I'd be looking at something to balance it, but I don't. Myk 23:52, 19 March 2007 (EDT)

The fact that Giuliani received a deferrment is notable. The fact that he never served in the military is not. It could be justified in an electability section, but not in his early life section. Was he also not a Boy Scout? Myk 00:16, 21 March 2007 (EDT)

As a person who is seeking the Presidency, the Commander in Chief of America's military, it is of significance to include in an encyclopedia that persons history of involvement or lack of involvement during in that military, particularly during a time of war.--Eljoe2 00:35, 21 March 2007 (EDT)

And people can figure out for themselves that he didn't serve by the fact that it is never mentioned that he did serve. Myk 00:38, 21 March 2007 (EDT)

The quote I removed was from someone working on his campaign staff in regards to the Firefighters Union and John Kerry, that seems 1)Biased because of the source and 2) More fitting for John Kerry's entry. It should be removed.--Eljoe2 00:39, 21 March 2007 (EDT)

If I recall correctly Dick Cheney had "other priorities" during the Vietnam War, getting multiple deferments in the process. Just an observation that may be taken into account here. --Crackertalk 00:44, 21 March 2007 (EDT)

So Eljoe made a good point anyway... the source was from the Giuliani campaign. Note that the Union supports Democratic candidates, which it does, and leave the analysis portion out of it. And unlock the article. Just because people disagree with you is not a good reason to protect an article.Myk 00:49, 21 March 2007 (EDT)

Actually, it is not clear that the Union has a record of endorsing democrats, the artcle provides the single example. In addition the linked reference actually then describes the political makeup as "About 42 percent of IAFF members are Republican, 40 percent Democratic and the rest independent, according to union spokesman Jeff Zack." --Eljoe2 00:57, 21 March 2007 (EDT)

Dude, you are abusing your power as a sysop. I have presented multiple compromises and alternative ways to phrase it to present a neutral POV. I'm not going to IM you because I'm not going to give you my IM address. You seem to feel the need to bold your comments as if this will make them more important. It won't. And how can the constant reverts and edits change if it's locked? This is a wiki. If conservapedia turns into a top-down power structure, it will paint a very bad picture of conservatives. Myk 01:00, 21 March 2007 (EDT)

And yes, something more than ideology is bothering me. List the facts, avoid speculation, let people find their own truth. Did Giuliani receive a deferment? Yes. Did he serve in the military? No... but people are smart and when they see no military record and the fact that he received a deferment, they'll figure it out? Was he rebuked by a firefighter's union? Yes. Does that union have a Democratic trend? Also, yes. Reporting the speculation of a Giuliani employee as to the possible motivations of rebuke, however, is not encyclopedic, even if it is reported by Bloomberg news. Myk 01:18, 21 March 2007 (EDT)

Just a note: We have an IRC channel set up on irc.freenode.net #conservapedia to allow real time...discussions. Crackertalk 01:02, 21 March 2007 (EDT)

If information about the Union is to be included to show that it is biased towards democrats than more information on that bias should be presented. Their support of John Kerry is not enough. Providing an official record of who they backed since their creation would show that. This article does not. If you want to show their political makeup include the quote from the same source I posted above.--Eljoe2 01:13, 21 March 2007 (EDT)

The part about the Union bias is still a direct statement from Giuliani's camapign staff. That is spin, not a fact. A fact is the political makeup of the Union as in the quote from the same article "About 42 percent of IAFF members are Republican, 40 percent Democratic and the rest independent..." or that the Union has endorsed the Democratic candidate for President in the past two election cycles.--Eljoe2 01:34, 21 March 2007 (EDT)

Yes, read the article. It said Rudy's response was....: and given by his campaign office, which is all he has, since he is no longer Mayor, eh? Would you prefer to change it, remove the response and add that the Union has endorsed Democratic candidates the last two election cycles for President? --~ Sysop-TK Talk2Me! 01:57, 21 March 2007 (EDT) 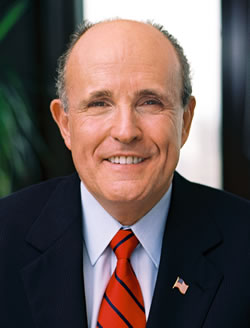 What is the process for making corrections/additions to protected pages such as the Rudy article? Here's one simple example. There is bad grammar in the September 11 errorist attacks section:

A week after the 9/11 attacks and has been on almost every short list of Republican contenders ever since.

That is not a sentence and I'm not even sure what it was supposed to say. I think there are other passages that could use copyediting. There might also be places with more substance that could be improved.

I recognize that vandalism is a problem but there must be a mechanism for making improvements in spite of protection. Sbowers3 10:39, 29 September 2007 (EDT)

Looks like Giuliani is the victim of ongoing FISA abuse. All those closest to Trump - Roger Stone, Jerome Corsi, Rudy, have been eliminated as advisors in his re-election bid. Others - Manafort, Flynn, Cohen etc. are long gone. RobSDe Plorabus Unum 17:55, 13 October 2019 (EDT)

Because of the chronological mess that it is in, it's difficult and confusing to add new content to. RobSFree Kyle! 18:57, July 8, 2021 (EDT)