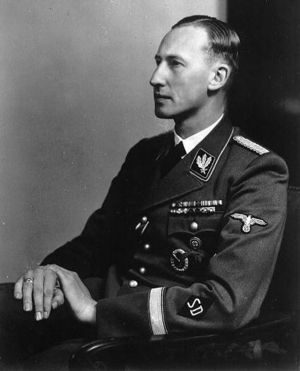 Reinhard Tristan Eugen Heydrich (nickname Der Henker: the Hangman) was a high ranking Nazi political officer in the notorious Schutzstaffel (SS), the chief lieutenant of Heinrich Himmler, and the man most responsible for the creation and implementation of the Holocaust against the Jews of Europe.

He is regarded by some historians as the most sinister figure in the Regime, and Hitler referred to him as "the man with the iron heart".[1]

Heydrich was born March 7, 1904 in Halle, Germany, the son of a composer and director of a musical conservatory, Richard Bruno Heydrich. One of Heydrich's father's compositions, written several years before Heydrich was born, was ironically entitled “Reinhard’s Crime”. Richard Wagner was one of his father's influences, and Reinhard was exposed to his music a great deal. He became a gifted violinist within a few years. A rumor a grandparent was Jewish, coupled with a slight build and high-pitched voice, caused young Reinhard to be introverted, and yet be as competitive as possible with those around him. He would also develop a hidden desire to get even, which he would put to use later on in life.

Just after World War I, he joined a Freikorps unit in 1919. In 1922, he entered the German Navy with the intent to secure a commission. By 1926 he obtained the rank of ensign (Leutnant zur See) and was assigned to a battleship as a signals officer. In April 1931, Admiral Erich Raeder dismissed him from the German Navy after a court of honor found him guilty of "conduct unbecoming an officer and a gentleman" for breaking off an engagement promise to a shipyard director’s daughter in order to marry Lina von Osten[2] Jobless for several months, he obtained an interview with Heinrich Himmler in the summer of 1931. Impressed with Heydrich, Himmler hired him to organize the intelligence and surveillance department of the SS known as the Ic-Dienst (Ic Service). Heydrich then joined the Nazi Party and SS. Himmler made him the chief of the SS Ic-Dienst unit on August 1, 1931. In the summer of 1932, the "Ic service" was renamed the Sicherheitsdienst (Security Service) or SD.[3]

Heydrich became head of the political department of the Munich police force soon after Hitler was appointed chancellor of Germany in 1933; his rapid reorganization of that force spread to others and helped bring them Himmler's control. Despite Heydrich's rapid rise in the ranks of the SS, his hopes for advancement rested only with his specialization (Himmler was just four years older than Heydrich). On April 20, 1934 Hermann Goering handed over the Gestapo to Himmler. Two days later, Himmler named Heydrich the chief of the Gestapo. Later on June 17, 1936, Hitler appointed Himmler chief of German police in the Ministry of Interior; he formed the (Sicherheitspolizei or SiPo) (the security police). The SiPo was made up of two sub-branches, the Kriminalpolizei (national criminal police) and the Gestapo, under Heydrich's overall command. Heydrich retained command of the SD, as well.[4]

Several events during the late-1930s expanded Heydrich’s influence and power. In 1938 a purge was conducted against the German High Command, removing many officers from their posts, either through forced retirement or being denounced and led off to concentration camps; Heydrich played a leading role, and as head of the Gestapo, he could arrest and jail his enemies with impunity. In early-November of that year, Kristallnacht took place; some 35,000 Jews were arrested on his orders, their property confiscated with the addendum that they would pay for the damage that was caused. And by 1939, Heydrich assumed the leadership of the Reichssicherheitshauptamt (Reich Security Main Office), the agency in charge of all of Germany’s secret and political police, security police, national criminal police and intelligence gathering services (outside the German Army, until taking over the Abwehr, German military intelligence, in 1944).[5]

In the last week of August, 1939, several German convicts were dressed in Army uniforms, sent to the Gleiwitz radio transmitter near the Polish/German border and summarily shot; the plan for the fake attack was certainly Heydrich’s, and the “news” of German soldiers being swarmed over by Polish raiders gave Hitler the pretext to invade Poland on September 1, 1939.

Soon after the conquest of Poland, Heydrich and his head of Jewish affairs, Adolf Eichmann, began the first large-scale deportations of Jews to ghettos in established in Polish cities, principly Warsaw, for the purpose of confining Jews until further actions to be determined; the Judenräte (Jewish Councils) was largely his creation as well, meant to increase German control over the ghettos, and in the future, direct the removal of Jews to the extermination camps. At the same time, Heydrich established and organized the Einsatzgruppen (Special Task groups), which fanned out into the occupied territories and murdered up to one million Soviet and Polish Jews in German-occupied territories.

To Gruppenführer Heydrich:
Supplementing the task assigned to you by the decree of January 24, 1939, to solve the Jewish problem by means of emigration and evacuation in the best possible way according to present conditions, I hereby charge you to carry out preparations as regards organizational, financial, and material matters for a total solution (Gesamtlösung) of the Jewish question in all the territories of Europe under German occupation.
Where the competency of other central organizations touches on this matter, these organizations are to collaborate.
I charge you further to submit to me as soon as possible a general plan of the administrative material and financial measures necessary for carrying out the desired final solution (Endlösung) of the Jewish question. (Order from Hermann Göring to Reinhard Heydrich, July 31, 1941)

On January 20, 1942 at a lakeside villa near Berlin named Wannsee a top secret conference was convened by Heydrich to implement methods and ideas for a "final solution to the Jewish question" (die Endlösung der Judenfrage). At the conference were fifteen men, among them Eichmann, who would be instrumental in providing the logistical plans for removing the Jews to the camps. The men present were highly educated, and represented government agencies, such as the Gestapo, the Race and Resettlement Office, the SS, as well as a representative from the General Government in Poland. As Heydrich himself explained near the beginning of the conference, ideas were bartered about as to relocating Jews:

“Another possible solution of the [Jewish] problem has now taken the place of emigration—i.e., evacuation of the Jews to the east…Such activities are, however, to be considered as provisional actions, but practical experience is already being collected which is of greatest importance in relation to the future final solution of the Jewish problem.”

The minutes of the meeting were kept, but had been edited by Heydrich. The language it contains euphemisms in place of what was really said. Evacuation of Jews to the east and resettlement meant relocation to the concentration and extermination camps in Poland; special handling regarded the killing of Jews, either through slave labor in which the Jew was worked to death, or being killed immediately on arrival. The final solution was put into practice within a few months of the conference, as the bullets of the machine guns and the exhaust of carbon monoxide were replaced by the more efficient killing methods installed in the first gas chambers.

In September 1941 Heydrich was appointed the position of Reichsprotektor (governor) of Bohemia and Moravia (now in the Czech Republic). As the “head” of a state with a free hand, he mollified the Czechs with improved social and working conditions, combining them with repression and mass executions. His success in “pacifying” the Czechs lulled Heydrich into a false sense of security; he referred to them as “my Czechs” at times, and refused to believe they would cause him harm. On May 27, 1942 two Free Czech soldiers trained in, and transported from, Britain, had lain in wait on a Prague street corner as he arrived in his typical style, an open car without an armed escort. The corner forced the car to slow, allowing the agents to throw a bomb at the car and wound Heydrich. Although his injuries were not life-threatening, embedded horsehair fibers from the seat caused an infection, and he died June 4.

After his state funeral in Berlin, “Operation Reinhard” was commenced in his memory, it included a retaliatory act against the citizens of Lidice, just north of Prague; hundreds were executed, and the town was dynamited and razed.