From Conservapedia
(Redirected from Polar bears)
Jump to: navigation, search

The polar bear (Ursus maritimus) is a species of bear native to the land and coastal areas of the high Arctic, and noted for their white fur. The largest living terrestrial carnivore, the polar bear has experienced a resurgence of population since attracting the attention of conservationists in the mid-twentieth century.

Although certain polar bear populations have been steadily increasing in recent decades, [2] the environmental movement has strived to have the polar bear declared an endangered species (see activism below).

Male polar bears average nearly 900 pounds in weight, with one weighing in at 1,760 pounds; by comparison, the average brown bear weighs in at 600 pounds. Females are smaller, averaging about 550 pounds. Black skin is kept warm by a six-inch layer of fat and the hollow hairs of the fur, which directs sunlight to the skin to help warm it.

The polar bear is the most carnivorous of all the bears, feeding on seals, walrus, beluga whales, and animals as small as lemmings and mussels. Further inland they may eat berries; in the town of Churchill, Canada, they have been observed feeding in the garbage dumps. Polar bears have a strong sense of smell, and can find food from walking several miles on the scent alone. Strong swimmers as well, they have been sighted over one hundred miles out to sea

Polar bears hibernate through much of the winter, usually in an excavated snow den. Cubs are born in the spring, and stay with their mother for up to two years. Males, which are generally solitary, will at times cannibalize the cubs if given the opportunity; as with all bears, however, the females are very protective of their young and will fight off the males viciously.

Polar bears have been known to interbreed with grizzly bears in the wild, producing a polar-grizzly hybrid.[1]

Human populations within the Arctic Circle have routinely hunted the polar bear for meat and skins, and sometimes for sport. In one famous incident a young Horatio Nelson was almost killed by a polar bear that he intended to hunt; when his gun misfired the attacking bear was driven off by a cannon-shot from Nelson's ship. [3]

A belief in over-hunting during the 1960s and 1970s and the drop in bear population levels prompted the five Arctic nations with polar bear populations to create and sign the International Agreement on the Conservation of Polar Bears in 1973.[2] Since these conservation efforts had been made, the world population rose to an estimated 22-27,000[3] even though there is no adequte census.[2] where it currently stands. However, a variety of additional factors, such as airborne toxins (polybrominated diphenyl ethers, or PBDEs) or the claimed effects of man-made global warming may have caused a decrease in bear population, principly Alaska where an estimated 2,000 bears exist, and Hudson Bay, Canada, where a drop was recorded from 1,100 bears in 1995 to fewer than 950 in 2004.

In 2002, the US Geological Survey in the Arctic Refuge Coastal plain reported the polar bear population was near historic highs. [4]

The polar bear has become a "symbol of global warming caused by humans" in the eyes of environmentalists. The World Conservation Union (IUCN) classified the polar bear as a "vulnerable species" on the "Red List of Threatened Species".[4] The given reason was not hunting, but rather the assumed impact of global warming on their habitat.[5][6][7] Some groups even went as far as suing the Interior Department with the aim of adding polar bears to the list of threatened species.[8]

These activists try "to use the Endangered Species Act to force the U.S. government to take action on global warming". Critics have pointed out that global warming activists should address climate change directly.[9]

According to Mitchell Taylor, who studies the polar bear in Canada,

"Polar bears were well developed as a separate species by the Eemian interglacial approximately 125,000 years ago. This period was characterized by temperature fluctuations caused by entirely natural events on the same order as those predicted by contemporary climate change models. Polar bears obviously adapted to the changing environment, as evidenced by their presence today. That simple fact is well known and part of the information contained in the reference material cited throughout the petition, yet it is never mentioned. This fact alone is sufficient grounds to reject the petition. Clearly polar bears can adapt to climate change. They have persisted for thousands of years in a period characterized by fluctuating climate. No rational person could review this information and conclude that climate change pre-destined polar bears to extinction."[11] 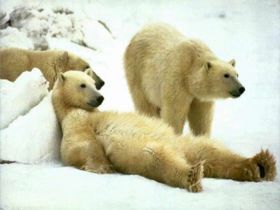