From Conservapedia
(Redirected from Model T)
Jump to: navigation, search

The Model T was introduced by Henry Ford and the Ford Motor Company on October 1, 1908. It was the most famous automobile in history, and 15 million cars were made before it was discontinued in 1927. 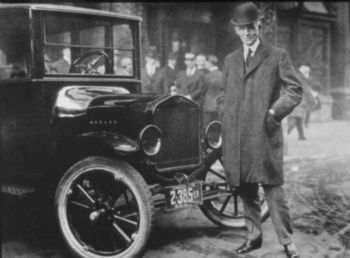 The Model T introduced many important innovations—such as the steering wheel on the left, which every other company soon copied. The entire engine and transmission were enclosed; the 4 cylinders were cast in a solid block; the suspension used two semi-elliptic springs. It had 20 horsepower and high wheels, so it could handle the muddy unpaved roads that typified the countryside. It could cruise at 45 miles per hour, getting about 10 miles per gallon of gasoline. It could power other devices, and was often converted to a truck. There were two forward gears and one fore reverse. A hand crank was used to start it. The car was very simple to drive, and—more important—easy and cheap to repair. It was so cheap at $825 in 1908 (the price fell every year) that by the 1920s a majority of American drivers learned to drive on the Model T, leaving fond memories for millions. Ford created a massive publicity machine in Detroit to ensure every newspaper carried stories and ads about the new product. Ford's network of local dealers made the car ubiquitous in virtually every city in North America. As independent dealers the franchises grew rich and publicized not just the Ford but the very concept of automobiling; local motor clubs sprang up to help new drivers and to explore the countryside. Ford was always eager to sell to farmers, who looked on the vehicle as a commercial device to help their business. Sales skyrocketed—several years posted 100 gains on the previous year. Always on the hunt for more efficiency and lower costs, in 1913 Ford introduced the moving assembly belts into his plants, which enabled an enormous increase in production. Sales passed 250,000 in 1914. By 1916, as the price dropped to $360 for the basic touring car, sales reached 472,000.[1]

By 1918, half of all cars in America were Model T's. As Ford wrote in his autobiography, "Any customer can have a car painted any colour that he wants so long as it is black".[2] Model T's rolled off the assembly line until 1927; the total production run was 15,007,034 cars.

By the mid-1920s, sales of the Model T began to decline due to rising competition. Other auto makers, especially General Motors, offered payment plans through which consumers could buy their cars; they offered a full range of vehicles from the cheapest to the most elaborate, instead of the one-size-fits-all Model T. Consumers eagerly paid more for more modern mechanical features and styling. Despite urgings from Edsel, Henry steadfastly refused to incorporate new features into the Model T or to form a customer credit plan.