From Conservapedia
(Redirected from Marie and Pierre Curie)
Jump to: navigation, search 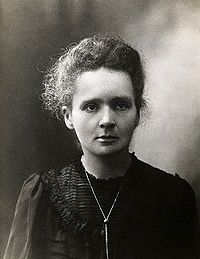 Marie Curie was a Polish-born physicist and chemist who lived most of her adult life in France. She was a pioneer in the field of radiation and radioactivity. Also, she was the first person to win Nobel Prizes in two different fields, physics (1903) and chemistry (1911). Her French husband, Pierre Curie, also studied radioactivity. In addition to that he also was a pioneer in the fields of crystallography, magnetism and piezoelectricity.

Marie Curie discovered two elements, previously unknown, both radioactive. One of them she named Polonium in honor of her native Poland, the other, Radium.

The Curie, a unit of radioactivity, is named in her honour, as is the chemical element Curium.

Marie Curie was an Agnostic.[1]