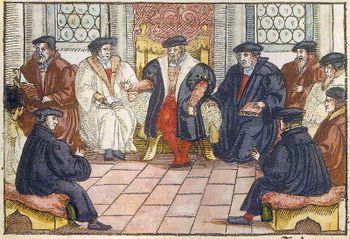 A 1557 wood carving of the Marburg Colloquy.

The Marburg Colloquy was a major debate of the Protestant Reformation that was held between October 1–4, 1529. It was over the Eucharist and was held in the town of Marburg, in modern-day Germany, between various Reformers. Although the Reformers agreed on nearly every doctrinal issue, they were strongly divided over the Eucharist, and the Marburg Colloquy did not solve this disagreement.

By the time of the Reformation, the Roman Catholic Church adhered to the doctrine of transubstantiation, which teaches that the bread and wine of communion would literally become the body and blood of Jesus Christ.[1] Due to the lack of a biblical basis for this doctrine, it was rejected by the Reformers.[1] Despite this, however, they were not united on the issue. Some Reformers, such as Martin Luther believed that Christ's body is present in and with the elements, but not physically.[1][2] Others, such as Ulrich Zwingli believed that communion is a memorial and a sign, and that Christ is spiritually—but not physically—present in the elements.[1][3]

Political impetus and initiation of colloquy

In the second Diet of Speyer in April 1529, a Roman Catholic majority passed a resolution against the Reformation.[4][5] Philip, the landgrave of Hesse, believed this to be a threat to survival of Protestantism and believed a Protestant political alliance was necessary to protect against any threats.[4] Because the theological disagreement over the Eucharist among Protestants, which had existed since 1524, was preventing such alliances, Philip called the colloquy in order to resolve the issue and clear the way for an alliance.[4][5]

The colloquy took place from October 1–4, 1529.[4] Luther and Zwingli were the leaders of their respective viewpoints.[5] In addition, other important figures in the debates included Philipp Melanchthon, John Oecolampadius, and Martin Bucer.[4] These people held discussions prior to the debates, which included numerous people, including Philip of Hesse, Duke Ulrich of Württemberg, numerous delegates from participating states, and about 60 guests.[4] While Zwingli willingly and eagerly participated, Luther did not wish to attend,[1] and he only went after Melanchthon convinced him to.[5]

The debate revolved around the exact nature of the presence of Christ during the Eucharist.[4] From almost the beginning of the debate, it was clear that no agreement would be reached.[5] While Zwingli tried to have a worthwhile discussion, Luther, who made clear at the beginning that he would not change his views, did not appear to have an desire to a substantive debate.[5] By the end, although Bucer believed an agreement could be reached, Luther and Zwingli thought otherwise.[4]

The Marburg Colloquy ultimately failed in finding an agreement on the issue of the Eucharist, and neither Luther or Zwingli would budge on their positions.[6] Both of them did repent of their harsh words against each other during the debate.[6] A Protestant political alliance could not be created.[5]

Philip of Hesse asked Luther to make a draft of every Christian doctrine that both sides could agree on, with the purpose of projecting unity.[5] Out of 15 theological points in the Articles of Marburg, every side agreed on 14 of them, with the Eucharist being the exception.[4][6]

While the Reformers could not agree on the Eucharist, the Marburg Colloquy could be seen as a sign of the theological unity of Protestants. In the Articles of Marburg, which Luther drafted during the meeting, all the Protestants could agree on 14 out of 15 theological issues, with the nature of Christ's presence in the Eucharist being the exception.[4][6] While this issue might seem minor to some, the issue is of essential importance, at least in the eyes of the Reformers, because of the major Christological issues involved.[6][7]

The failure of the colloquy may also be considered a positive because it showed that Protestant Christians would not compromise their theology for the sake of political alliances.[5]