Jacques-Louis David (Paris 1748 - Brussels 1825) was a French painter. He was one of the most prominent painters and the leader in France of the Neo-Classical movement. The earliest Neoclassical painters were Joseph Marie Vien, Anton Raphael Mengs, Pompeo Batoni, Angelica Kauffmann, and Gavin Hamilton, David's contemporaries included Jean-Germain Drouais. In 1774, he was awarded with the Prix de Rome with his "Erasistratus Discovering the Cause of Antiochus' Disease".

David painted in Rome is famous Oath of the Horatii. 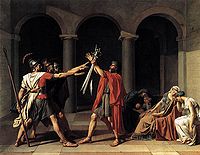 He was dictator of the arts after the execution of Louis XVI. During Napoleon I's regimen he developed an Empire style. At this time David painted Napoleon Crossing the Alps and became the official court painter of the regime. He was then commissioned for painting The Coronation of Napoleon in Notre Dame.

David's composition, characterized by the predominance of verticals and horizontals suggests stability. His economy of details projects austerity, yet his sense of color and light give light to his work. His last masterpiece was Mars Disarmed by Venus and the Three Graces. Portrait of Madame Récamier painted in 1800. The Coronation of Napoleon in Notre Dame The Sabine Women Enforcing Peace by Running Between the Combatants, (detail), 1774.
Retrieved from "https://conservapedia.com/index.php?title=Jacques-Louis_David&oldid=1617223"
Category: