The Hillary Clinton for President Exploratory Committee is the organization Senator Hillary Rodham Clinton had set up to begin fundraising and preparation for Hillary Clinton 2008 presidential campaign for the Democratic party nomination.

According to the New York Post, "serious tensions" existed between Hillary Clinton's Washington-based presidential campaign staff and her organization in New York. "Her New York crew is fighting like hell with her D.C. folks, and it's worse than the normal stuff, real serious tensions...The New York folks are the ones who got her elected to begin with. They've done it and know what to do. The D.C. folks are the 'geniuses' who do 'national elections' and think everyone here is a rube." [1]

According to Newsmax in June 2007, Hillary Clinton appointed Alcee Hastings, a former U.S. District Court judge who was removed from the bench, as co-chair of the Committee. Hastings was U.S. District Court judge for the Southern District of Florida from 1979 to 1989, until he was impeached and removed from office for corruption and perjury. He was only the sixth federal judge to be impeached and removed from office in American history. He ran successfully for the U.S. House in 1992. [2] Confusion has arisen over the Clinton Campaigns claim to have received endorsements from influential congressional members who have the refuted the idea. The Miami Herald, citing “sources close to the campaigns” reported that Rep. Kendrick Meek of Florida had endorsed Clinton. Meek, who represents a district with the highest concentration of black voters in Florida, fired off a quick letter to Patti Solis Doyle, Clinton's campaign manager, stating that he had not endorsed Clinton and that therefore “the Hillary for President Campaign is not authorized to use my name, image or this incorrect news report in any of your campaign literature.” [3]

A concern in the Hillary camp were polling numbers that stated Hillary Clinton was unelectable; a poll by Mason-Dixon Polling and Research found that 52 percent of Americans would not consider voting for Clinton.[4] An Electability Poll in which the participants are asked in no certain order, a list of candidates from both parties, whether they would vote for candidate X or prefer someone else. At the time, polling revealed, of all major presidential candidates from both parties, Hillary Clinton was the only candidate to whom a majority (52%) would not vote for, or would prefer someone else.[5]

The poll results showed majorities would consider voting for all other major presidential candidates or possible candidates: 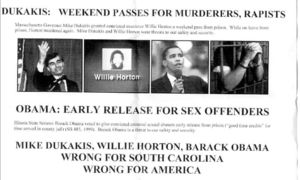 The flyer attacks Democratic candidate Sen. Barack Obama over the accusation he “voted to give criminal sexual abusers early release from prison” and claims that he “is a threat to our safety and security.”

A flyer circulating in South Carolina just prior to the Democratic presidential debate in July 2007 attacking presidential candidate Sen. Barack Obama (D-Ill.) over the accusation that he “voted to give criminal sexual abusers early release from prison,” [6] had been attributed to the Hillary Clinton campaign. In the flyer, Obama was compared to former Mass. Gov. Michael Dukakis - who came under fire during his 1988 presidential run for his release of convicted murderer William Horton who later committed rape and assault - and claimed that the Illinois Senator “is a threat to our safety and security.”

At the bottom of the leaflet was the statement “Mike Dukakis, Willie Horton, Barack Obama, wrong for South Carolina, wrong for America.”