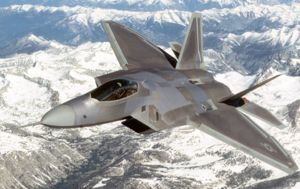 The F-22 Raptor is a stealth fighter produced by Lockheed Martin. It is capable of air-to-air combat, ground attack, electronic warfare and signals detection. It was originally developed to counter advances in technology in aircraft developed by the Soviet Union and replace the F-15 by incorporating the latest in stealth features and propulsion technology. However, the extremely high unit cost of the aircraft has meant successive and substantial cuts to the number of F-22s to be built. At present only 183 F-22s will be built. This will mean keeping the F-15 fleet in service for the foreseeable future.

The Raptor is powered by two Pratt & Whitney F119-PW-100 engines that produce in excess of 30,000 pounds of thrust each and posess 2D thrust vectoring capabilities. They give the Raptor the ability to "supercruise" at supersonic speeds without the use of afterburners as required by previous turbojet designs. The aircraft has an internal armament bay which holds air-to-air missiles and can carry various small bombs internally or on pylons, and has a 20mm Gatling Gun.

The F-22 Raptor evolved from the YF-22 experimental design produced for the US Air Force's Advance Tactical Fighter (ATF) competition in which the Lockheed Martin design defeated the rival Northrup Grumman designed YF-23.