From Conservapedia
(Redirected from Chappaquiddick)
Jump to: navigation, search 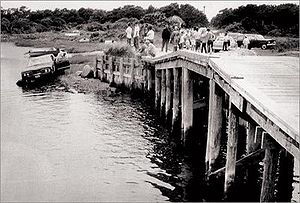 The Dyke Bridge at Chappaquiddick Island, with Senator Ted Kennedy's car on the shore below, July 19, 1969

Chappaquiddick is a small island, about six square miles, just off of Martha's Vineyard south of Cape Cod, Massachusetts. Most of it is conservation land held by the Trustees of Reservations, a private organization.

It was the location of the death on Friday, July 18, 1969, of an attractive young, blonde woman after she left a summer party with a powerful married liberal Democrat, Senator Ted Kennedy, who then evaded justice for his crime relating to her death. The woman left her purse, driver's license, and room key at the party when she departed that evening with Senator Kennedy, and her underwear was missing when her dead body was recovered.

Kennedy reportedly made 17 phone calls, before eventually mentioning it to the police the following day. [1] Kennedy never apologized to the victim's parents.[2] It remains unknown whether Kennedy was driving while intoxicated and/or had sex with the victim, whose parents were devout Catholics. A 2017 critically acclaimed documentary movie entitled "Chappaquiddick" (called "The Senator" for its release in England), implied a relationship between Kennedy and the victim. Twenty years after the incident, the victim's father told a reporter that his daughter had not died in vain because it kept Ted Kennedy from ever becoming president.[2]

Many of Kennedy's assertions about the incident were demonstrably false, even absurd. For example, Kennedy asserted that he had a concussion and was then given sedatives, which supposedly impaired his judgment afterwards. But sedatives are not given to victims of concussions. Kennedy also wore a phony neck brace to the funeral of the victim which Kennedy obviously did not need, and was doing simply for show.

The death of Mary Jo Kopechne It is most famous as the location of an event known as the "Chappaquiddick incident," or simply "Chappaquiddick." The narrow bridge connecting Chappaquiddick Island to Martha's Vineyard was the location of the death of a young woman, Mary Jo Kopechne, in a car driven by Senator Ted Kennedy on July 19, 1969. This became one of the most famous political events of the late 20th century and likely prevented Ted Kennedy, the brother of President John F. Kennedy, from ever becoming president himself.[3]

The wheels of the car, an Oldsmobile Delmont 88, were indisputably protruding above water at low tide. This rendered absurd Ted Kennedy's account of the incident, as explained here:

This was the statement given by Ted Kennedy to Police Chief Dominick Arena the morning after the accident:

"On July 18, 1969, at approximately 11:15 PM in Chappaquiddick, Martha's Vineyard, Massachusetts, I was driving my car on Main Street on my way to get the ferry back to Edgartown. I was unfamiliar with the road and turned right onto Dike Road, instead of bearing hard left on Main Street. After proceeding for approximately one-half mile on Dike Road I descended a hill and came upon a narrow bridge. The car went off the side of the bridge. There was one passenger with me, one Miss Mary ________ [Kennedy did not know how to spell the woman's last name], a former secretary of my brother Sen. Robert Kennedy. The car turned over and sank into the water and landed with the roof resting on the bottom. I attempted to open the door and the window of the car but have no recollection of how I got out of the car. I came to the surface and then repeatedly dove down to the car in an attempt to see if the passenger was still in the car. I was unsuccessful in the attempt. I was exhausted and in a state of shock. I recall walking back to where my friends were eating. There was a car parked in front of the cottage and I climbed into the back seat. I then asked for someone to bring me back to Edgartown. I remember walking around for a period of time and then going back to my hotel room. When I fully realized what had happened this morning, I immediately contacted the police.[5]

More important now than the loose ends of his unsatisfying accounts are the reasons they were left so loose. If Mr. Kennedy used his enormous influence to protect himself by leading a cover-up of misconduct—and the known facts lead to that suspicion—there would hang over him not just a cloud of tragedy, but of corruption, of the Watergate kind.[6]

Time, and a Witness

According to the testimony of the other party-goers, Kennedy left the party at around 11:15 or 11:30, and party guest Mary Jo Kopechne asked for a ride back to her hotel. Kennedy drove his mother's 1967 Oldsmobile Delmont 88. A deputy sheriff later testified that he saw Kennedy's car on Dyke Road at 12:40 am, and that the driver sped off when he approached it.

According to Kennedy, he made a wrong turn onto an unlit dirt road that led to Dike Bridge, a wooden bridge angled obliquely to the road with no guardrail, and drove over its side. The car plunged into tide-swept Poucha Pond (at that location a channel) and came to rest upside down underwater. Kennedy later recalled that he was able to swim free of the vehicle, but Kopechne was not. Kennedy claimed at the inquest that he called Kopechne's name several times from the shore, then tried to swim down to reach her seven or eight times, then rested on the bank for several minutes before returning on foot to Lawrence Cottage, where the party attended by Kopechne and other "Boiler Room Girls" had occurred.

According to one commentator, his route back to the cottage would have taken him past four houses from which he could have telephoned and summoned help; however, he did not do so.

"I will take care of the accident"

According to their later testimony, Gargan and party co-host Paul Markham then returned to the pond with Kennedy to try to rescue Kopechne. Both of the other men reported that they also tried to dive into the water and rescue Kopechne multiple times. When their efforts to rescue Kopechne failed, Kennedy claimed that he said to the others, "You take care of the other girls and I will take care of the accident". According to Gargan and Markham, they then returned to the cottage and told the women nothing, at Kennedy's request. According to Gargan and Markam's testimony, they assumed that Kennedy was going to inform the authorities once he got back to Edgartown, and thus did not do so themselves.

Kennedy decided to return to his hotel; however, the Edgartown-Chappaquiddick ferry (which connects Chappaquiddick to the rest of the island) had shut down for the night, so Gargan and Markham drove Kennedy to the ferry crossing and Kennedy then swam across the 500-foot channel, back to Edgartown, where he supposedly fell asleep on his hotel bed at around 2 am.

Back at his hotel, Kennedy complained at 2:55 am to the hotel owner that he had been awoken by a noisy party. By 7:30 am the next morning he was talking "casually" to the winner of the previous day's sailing race, with no indication that anything was amiss. At 8 a.m., Gargan and Markham joined Kennedy at his hotel where they had a "heated conversation", even though the ferry operator did not see them take the ferry to get to Edgartown. The three men subsequently crossed back to Chappaquidick Island on the ferry, where Kennedy made a series of phone calls from a payphone by the crossing to his friends for advice; he again did not report the accident to authorities.

Did not report accident resulting in death for 10 hours

Earlier that morning, two fishermen had seen the overturned car in the water and had called the police. A diver was sent down and discovered Kopechne's body. The diver later testified at the inquest that Kopechne's body was pressed up in the car in the spot where an air bubble would have formed. He interpreted this to mean that Kopechne had survived for a while after the initial accident in the air bubble, and concluded that

Police checked the car's license plate and saw that it was registered to Kennedy. When Kennedy, still at the pay phone by the ferry crossing, saw that the body had been discovered, he crossed back to Edgartown and went to the police station: Gargan simultaneously went to the hotel where the Boiler Room Girls were staying to inform them about the incident. Kennedy discussed the accident with several people, including his lawyer and Kopechne's parents, before discussing it with the police the next morning.

Ted Kennedy is still sometimes referred to sarcastically as the Hero of Chappaquiddick.