The Battle of Yorktown was fought in the fall of 1781 in Yorktown, Virginia, between British forces under the command of General Lord Charles Cornwallis, and the American Continental Army under Lieutenant General George Washington along with the French army under Comte de Rochambeau, and the French fleet under Admiral de Grasse. The victory at Yorktown effectively ended the American Revolution.

By the summer of 1781, the United States had been at war with England for over six years.

In the summer of 1780, the Americans received a major boost to their cause when 5,500 French troops, commanded by Comte de Rochambeau, arrived at Newport, Rhode Island. France had been sending supplies to the United States all along, but after France and England declared war against each other in 1778, French King Louis XVI sent troops and naval assistance to the United States to engage the enemy. 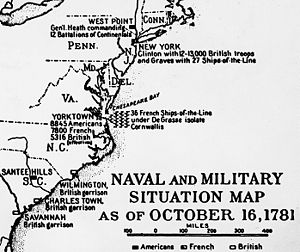 When Rochambeau’s forces arrived, the British were operating on two fronts. General Clinton, commander of British forces in North America, was occupying New York City. Cornwallis was marching north from South Carolina. The main American army under Washington was stationed along the Hudson River above New York City.

In the spring of 1781, Washington met with Rochambeau to plan an attack on Clinton. A French fleet was expected to arrive in New York later that summer, and Washington wanted to coordinate the attack with the fleet's arrival. As planned, Rochambeau's army marched in July and joined with Washington's troops outside New York City, only to learn that the French fleet was sailing to the lower Chesapeake Bay.

Washington changed his strategy to make Clinton think he was planning to attack him in NEw York City, while instead slipping away to the south to trap Cornwallis. In order to fool Clinton, Washington had his men build big army camps and huge brick bread ovens visible from New York to give the appearance of preparations for a stay. Washington also prepared false papers under his signature discussing plans for an attack on Clinton, and let these papers fall into British hands. British intelligence failed and Clinton thought Washington and the French army were stationary.

Washington and Rochambeau set out for Yorktown in mid-August and they arrived in Williamsburg, 13 miles west of Yorktown, in mid September.

The French fleet, as part of the overall plan, entered the lower Chesapeake Bay in the end of August and disembarked 3,000 French troops to wait for Washington and Rochambeau in Williamsburg. On September 5, they encountered the smaller British fleet in a naval engagement known as the 'Battle of the Capes. The British broke off the engagement and returned to New York for reinforcements. The French, commanded by Admiral de Grasse, remained in the lower Chesapeake and established a blockade.

By the end of September, approximately 17,600 American and French soldiers were gathered in Williamsburg, while 8,300 British soldiers were occupying Yorktown, including a small number of German auxiliary troops (called "Hessians") hired to help fight the war.

Cornwallis recognized the odds were in the allies' favor, and he sent Clinton a note asking for help. Clinton responded that a British fleet with 5,000 men would sail for Yorktown from New York on October 5.

Cornwallis had his men construct a main line of defense around Yorktown that consisted of ten small enclosed forts (called redoubts), batteries with artillery and connecting trenches. The Americans and French marched from Williamsburg to Yorktown on September 28 and began digging a trench 800 yards from the British defense line to begin a siege. By October 9, the allies' trench was finished and their artillery had been moved up. Firing at the British continuously, they had virtually knocked the British guns out of action by October 11. Cornwallis had the additional misfortune to learn at that time that Clinton's departure from New York had been delayed.

During the night of October 11, the allies began a second trench 400 yards from the British. The next days were spent bringing up artillery and strengthening the new line. The new line could not be completed, however, without capturing British redoubts 9 and 10. On the night of October 14, 400 French stormed redoubt 9 and 400 Americans stormed redoubt 10, capturing them in less than 30 minutes. Nine Americans and 15 French died in this brief and heroic action.

On October 16, the British tried two desperation moves. Early that morning they attacked the allied center, attempted to silence a French Battery, but the French cannons were firing again in less than six hours. Late that night they tried to evacuate Yorktown by crossing the York River in small boats to Gloucester Point. A violent windstorm arose at midnight, however, scattering the boats and forcing an abandonment of the escape.

At 10 o'clock on the morning of October 17, 1781, a drummer beating a "parley," and a British officer with a flag of truce, mounted a parapet south of Yorktown. The allies saw the signal, and soon the incessant, devastating artillery fire ceased. A hushed stillness fell over the field. Lord Cornwallis, realizing the defeat of his army was inevitable, sent a handwritten note to Washington:

"Sir, I propose a cessation of hostilities for twenty-four hours, and that two officers may be appointed by each side, to meet at Mr. Moore's house, to settle terms for the surrender of the posts of York and Gloucester."

Washington agreed to only a two-hour cease fire for Cornwallis to submit general terms of surrender. Messages continued to pass over the battlefield between the two commanders. Finally, on the afternoon of October 18, the two British commissioners, Lieutenant Colonel Thomas Dundas and Major Alexander Ross met in "Mr. Moore's house" with the allied officers, Lieutenant Colonel John Laurens, for the Americans, and Second Colonel Viscount de Noailles (Marquis de Lafayette's brother-in-law), representing the French. The negotiations ended before midnight, and Laurens carried a rough draft of the articles to General Washington. Washington, however, was not completely happy with the results and made a few minor changes. Once the articles were revised and redrafted, a copy was sent to Cornwallis in Yorktown for his signature.

The Articles of Capitulation were terms for the surrender of Cornwallis's British army. The 14 articles directed the surrender from the disposition of the troops, artillery, and arms, to even the surrender ceremony itself.

The articles directed where the troops, now prisoners of war, were to be sent. The soldiers were marched off to camps in Frederick, Maryland, and Winchester, Virginia. One field officer for every 50 men was allowed to reside near their respective regiments to witness their treatment and deliver clothing and other necessaries to the soldiers at the camps. All other officers were paroled and allowed to go to Europe, New York, or any other American post then in possession of the British forces, on the condition they would no longer fight until properly exchanged. Another article provided for the care of the sick and wounded prisoners. Proper hospitals would be furnished, with patients attended by their surgeons on parole. Medicine and supplies were to be provided by the American hospitals, the British stores in both York and Gloucester, and passports would be issued to procure further supplies from New York if necessary.

The third article referred to the surrender ceremony and contained the provision that deprived the British of the honors war. Customary honors allowed the surrendering troops to march out of their works with their regimental flags flying and playing an enemy's tune in honor of the victor. George Washington was not going to allow these honors, instead he stated, " The same honors will be granted to the surrendering army as granted to the garrison of Charlestown". In May, 1780, an American army was captured at Charleston, South Carolina and not given the honors of war, therefore, in retaliation, the British would not be granted them at Yorktown. The troops, the article read, were to "...march out...with shouldered arms, colors cased, and drums beating a British or German march. They are then to ground their arms and return to their encampment, where they will remain until they are dispatched to the places of their destination..."

By the afternoon of October 19, 1781, both commanders had signed the Articles of Capitulation, and the defeated British army was marching out from Yorktown to lay down their arms, ending the last major battle of the American Revolution.

They did not know that on that very day, Clinton sailed for Yorktown from New York with 5,000 troops.

News of the British defeat at Yorktown spread quickly. Celebrations took place throughout the United States. London was shocked. The British prisoners were marched to prison camps in Winchester, Virginia and Frederick, Maryland. The American army returned to the Hudson River, while the French army remained in Yorktown and Williamsburg for the winter. Clinton and Cornwallis eventually returned to England where they engaged in a long and bitter public controversy over who was to blame for the British defeat at Yorktown.