The Austrian school of economics is a school of economic thought which supports the libertarian philosophy by pointing out the inefficiency and ineffectualness of government intervention. However, Austrian economics is a positive, not a normative, school of thought and therefore has no inherent political leaning. It views all value as subjective, and that efficiency consists of maximizing value as sought by each individual. It avoids mathematics because it does not feel math can capture the complexities of the economic world and, more importantly, because it views social sciences to be properly based on rationalism and a priori reasoning. Austrian economists, like many other free market economists including Chicago School and neo-classical economists, believe free trade is key to prosperity. Austrians, unlike many of the same economists however, also believe the free market can function in areas such as infrastructure (roads,[1] electricity,[2] etc.), defense (police,[3] military[4]), and dealing with "externalities" [5] (pollution,[6] free riders,[7] etc.). Austrian School reasoning starts from self-evident truths (human being acts) and deduces everything from there.

The Austrian school of economics opposed the inflationary approach of Keynesian economics, and thus is favored by many conservatives on that basis. It also completely refuted Marxism both on theoretical grounds (refuting the exploitation theory) and on practical grounds (showing why socialism will always fail in the famous "economic calculation debate" and why liberal-favored mixed economies are always fragile). Liberals so far have refused to engage the Austrians in argument, as evidenced by liberal economist Paul Krugman's continuous refusal to debate against proeminent Austrian Robert P. Murphy. 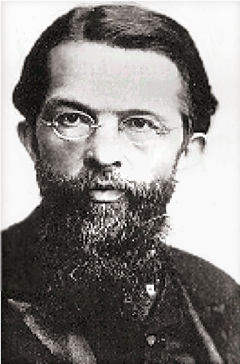 Carl Menger
The founder of the Austrian school of economics was Carl Menger (although many consider Frederic Bastiat a pre-Austrian), who published in German in 1871 its leading text, Principles of Economics. In the 1920s through 1940s, Ludwig von Mises and Friedrich A. Hayek advanced the movement by declaring the impossibility for socialism to succeed and also explaining the nature of the business cycle. Mises' most important student, Murray Rothbard, led the Austrian School after Mises' death and made many contributions to Austrian monopoly and monetary theory, along with expanding the traditional analysis of government interventionism to areas such as defense, police, and courts, concluding that socialism in these areas works no better than in others.