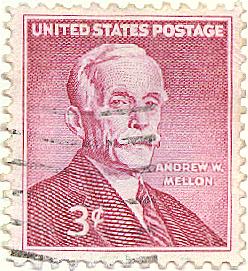 He was appointed Secretary of the Treasury by President Warren G. Harding in 1921.

His theory was that big business would prosper in proportion to the lightening of its tax load and its profit, would be transferred to the rest of the nation.[1]

Mellon served under presidents Harding, Coolidge and Hoover as Secretary of the Treasury, during which time he reduced U.S. debt by 9 billion dollars. .[2] Mellon ranked, at the time, as one of the richest people in the world. His vast art collection formed the basis of the National Gallery of Art.

The Andrew W. Mellon Foundation was formed on June 30, 1969. The Foundation philosophy is to build, strengthen and sustain institutions and their core capacities.

During the 1920s, Mr. Mellon began collecting with the intention of forming a gallery of art for the nation in Washington. In 1937, the year of his death, he promised his collection to the United States. Funds for the construction of the West Building were provided by The A. W. Mellon Educational and Charitable Trust. [1]