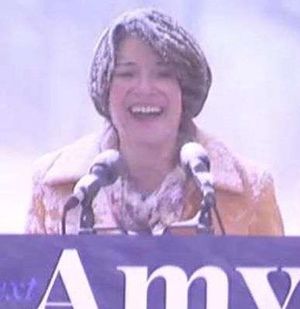 Klobuchar announces her campaign against global warming and for the New Green Deal in the worst blizzard in decades.[1]

Democrat Senator Amy Klobuchar announced her candidacy for the 2020 presidential election making global warming and the Green New Deal her number one issue under blizzard conditions during record snowfalls in February 2019.

"My fear for the Democratic Party is that people are going to see who can be the most virulent, anti-Trump person — and that is his game; his game is to be angry and snide. I think people are exhausted. I think people want to believe that we can be better than that.”[3]

“The way Sen. Klobuchar behaves in private with her staff is very different than when she’s in the public eye, and that kind of cruelty shouldn’t be acceptable for anyone.”[4]

Huffington Post reported on her reputation for cruelty and emotional abuse. Vanity Fair claims "Terrified aides say Amy Klobuchar is just like Trump,"[5] and that veteran Senate staffers have refused to work on her presidential campaign staff. Klobuchar has had the highest turnover rate of staffers of any Senator between 2000 and 2016. Commenting on Eric Holder's advocacy of violence, the New York Times quoted Klobuchar as saying, "when they go low, we have to respond,” and responding "means continuing to push your own agenda." Klobuchar's agenda includes the New Green Deal, the War on Cow Flatulence, and the communist Medicare for All proposal.

After spouting some drivel about John McCain, Klobuchar was instructed by Meghan McCain to "leaving my fathers' memory and legacy out of presidential politics."[6]

Seasoned ex-staffers describe Klobuchar as "unbearable" and "worse" than the reputation Klobuchar garnered before taking jobs her office.[9] Anything can set her temper off, and it is unpredictable. Among the things that staffers said prompted fits of rage from Klobuchar: minor grammar mistakes, the use of the word “community” in press releases, or failing to charge her iPad. Klobuchar's temper also affected her own ability to do her job, making it difficult to prep her for interviews or distracting her in the moments before a Committee hearing.

Female staffers don't buy the progressive robot Klobuchar machine line that criticism is "sexist," saying that if a male lawmaker had abused staffers as Klobuchar has done, it would have been written about. HuffPost obtained an eight-page memo from Klobuchar's 2006 Senate run, detailing the responsibilities and challenges of working with Klobuchar:

"if she is EXTREMELY upset about something, let her rant through it, DON’T interupt her unless ABSOLUTELY necessary and be careful when trying to calm her down … Often she just needs to talk things out in the open and is not interested in other people’s opinions."

BuzzFeed reported on Klobuchar's temper tantrums, comparing issues surrounding the Senate Judiciary hearings on Facebook to her selection of what clothes to wear:

Klobuchar’s behavior as a leader didn’t just affect her employees but limited their ability to conduct Senate work, creating a chaotic environment where staff were forced to devote as much time to managing their boss’s unpredictable anger as they did to governing.
“She can be just as mad about a crisis with Facebook” as she was about being given the wrong clothing for an event, said a second former staffer, pointing to the senator's work on issues surrounding Facebook. “It will take you just as much staff time and energy to put out that kind of crisis as you spend on [doing Senate Committee work investigating] Facebook.”
The employees all asked not to be named, most because of fear of retribution from Klobuchar.

Constituents, the NAACP, Black Lives Matter and social justice activists have called on Klobuchar to withdraw from the presidential race based on her racist prosecution and conviction of an innocent black man in a 2003 murder case.[10][11][12]

The Washington Post reported as a prosecutor in heavily white Minnesota, Amy Klobuchar declined to go after police involved in fatal encounters with black men.[13]

Christopher Burns, a 44-year-old black man, was unarmed and at home in Minneapolis with his fiancee and three young children when the police arrived in response to a domestic violence call. The officers put him in a chokehold, and he died on the scene, according to the medical examiner.

The 2002 incident marked the third killing of a black person by the city’s police department that year, prompting local activists to stage rallies and demand that the two officers involved in Burns’s death face charges.

The focus of the community’s anger was Amy Klobuchar, the up-and-coming attorney of Hennepin County, who had declined to prosecute police accused of using excessive force against black suspects....Klobuchar, then 42, declined to bring charges against the officers, and a grand jury she convened did not indict them.

As county attorney, Klobuchar claimed a causal relationship between kids skipping out on school and killing people. In 2003, Black kids faced over 60 percent of Klobuchar’s new juvenile delinquency petitions, despite Black people only being about 13 percent of her county’s population at that time.

Klobuchar also worked on the front lines of Minnesota’s version of Project Exile, called Minnesota HEALS. Both programs were a way to easily federalize “felon with a firearm” cases to obtain much harsher, parole-ineligible sentences.

Project Exile has been called draconian and racially biased. Minnesota HEALS nominally aimed to be a kinder, gentler version of Project Exile, whereby cops would work to convince gang members to leave the lifestyle, then offer social services as follow-up. However, that part of the mission was sidelined so Klobuchar could help exile many young Black men to federal prisons several hundreds of miles from home....

She later endorsed Michael O. Freeman for Hennepin county attorney in 2018—the same prosecutor who victim-blamed Jamar Clark for his murder by police officers and nostalgically said on air that Minneapolis was a “simpler society” before the Black people moved in.

Over eight years beginning in 1999, the city of Minneapolis paid $4.8 million in legal settlements related to 122 police misconduct incidents. And police officers and county sheriffs were involved in 29 civilian deaths.

Klobuchar, however, chose not to criminally charge any fatalities involving law enforcement. Instead she routinely put the decision to a grand jury, a process widely criticized for its secrecy and for mostly allowing the police version of events. Klobuchar also didn't take on any of the misconduct claims.

The mother of a black teenager who was shot and killed by police in 2004 begged Klobuchar to file charges against the officer instead of presenting the case to a grand jury.

"The grand jury is a way of hiding that the prosecutor is not giving the full information of guilt to the grand jury," Tahisha Williams Brewer wrote to Klobuchar at the time. "I want this process out in the open, where everyone can observe it and make sure that it is fair to my son."

Klobuchar did not directly respond to Williams Brewer and proceeded to present the case to a grand jury...

"I think there was a significant amount of indifference on her part with regards to the problems facing the Native-American and African-American community," said Ron Edwards, a longtime civil rights activist who served on a police relations council created through the federal mediation process.

Klobuchar delayed paying campaign workers in order to make her mandatory campaign finance reports appear better than they actually were. By putting off the payments, Klobuchar was able to put the best possible spin on her presidential campaign's financial position during the previous three months. If those expenses had come a day earlier, Klobuchar's cash on hand figure would have been roughly $6.35 million for the first quarter of 2019. Instead, the campaign was able to claim roughly $7 million in reserves—a sum that placed her among the better-positioned Democrats in the presidential race. The same accounting tricks continued in succeeding quarters.[16]

Klobuchar is one of the original sponors of the communist New Green Deal.[17]

Klobuchar is married to the Clinton/Obama Iranian nuclear deal.[21]

The Green New Deal is a radical communist and totalitarian plan to destroy America introduced into the 116th Congress as H. Res. 109 on February 7, 2019 co-sponsored by Amy Klobuchar. [22][23][24][25][26][27] It fundamentally seeks to save the planet from total destruction by greenhouse gases in twelve years by installing single-payer Medicare for All. Simply put, it is an intersectional coalition of the environmental movement and the socialist welfare state. The "climate crisis" gives urgency to pass legislation that will destroy American freedoms, such as the right to own a car, a gun, or private health insurance. Six weeks into Democrat control of Congress it already claimed victory for destroying 25,000 jobs.[28]

Among several provisions, the Green New Deal would:

The Green New Deal puts Klobuchar at odds with the large agricultural and labor base of her home state of Minnesota and her own Democrat Farm-Labor party.