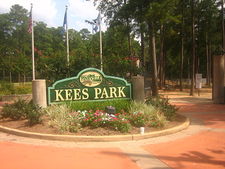 A Democrat, Kees was elected mayor at the age of twenty-nine. That same year a flood of the Red River spilled over into Pineville because of levee height and strength. However, the taller and stronger levee held in the sister city of Alexandria. Mayor Kees set forth to bring the levee on the eastern side of the river on par with that in Alexandria.[5]

In 1948, Pineville had only one police car and one fire truck. With city finances at a low ebb, Kees went to his store, Kees General Store on the Red River to obtain gasoline for both vehicles. Nearly seventy years later the size of the city and its service employees have mushroomed beyond what many at that time would not have thought likely or possible.[6] Kees resigned as mayor midway in  his second term in August 1952 to become director of the 1,150-patient Louisiana Colony and Training School at nearby Kingsville. He was succeeded as mayor by Horace Luther "H. L." Willis, a five-year member of the Pineville City Council and a long-term building superintendent for his alma mater, Louisiana College.[7]  Early in 1955, Kees was installed as superintendent of the state school. This brought him into conflict with clinical director William P. Hurder, a psychologist and physician, with whom he had earlier shared authority. Kees' promotion touched off charges of "politics" in his selection. Then state Representative Cecil R. Blair of Alexandria defended the selection, but because of the controversy, Kees resigned from the school to return to the private sector.[8][9]

Kees and his wife, the former Eloise Hutchinson (1917-2005), and other family members are interred at Greenwood Memorial Park in Pineville.[1]    Kees Park, located at the intersection of the Pineville Expressway and Louisiana Highway 28 East, is named for William Kees, Sr. The facility hosts a large number of community events.[2]