Willem de Kooning (Rotterdam, 1904 - Springs b. East Hampton/N.Y., 1997) was an Abstract Expressionist painter and sculptor. He emigrated from the Netherlands to the United States in 1926. There he had the influence of Arshile Gorky with whom he started a studio. Between 1935 and 1939 he worked for the Federal Art Project, for which he painted murals. His first one-man exhibition took place in 1948. He became one of the leading exponents of Abstract Expressionism and particularly of "Action Painting".

De Kooning constantly experimented newer content within the boundaries of the Abstract Expressionist movement that he became synonymous with. He was forever engaged with the idea of the figure, relentlessly challenging himself to address it in new ways. [1]

De Kooning is best known for the painting Woman V, which took two years to complete. Among his best-known works is a series of images of women started in 1938 and done with roughly applied pigment and raw colors.

He and Jackson Pollock were both important figures in the Abstract-Expressionist school. His later work showed an increasing preoccupation with landscape, but in the 1960s, he worked on a new group of Women. During this period his work was marked by a heightened colour intensity and density which in turn was replaced by lighter tones and larger, more reduced forms. He painted abstract landscapes after 1995. [2] [3]

In 1964 he received one of the greatest distinctions awarded in America, the "Presidential Medal of Freedom". [4] 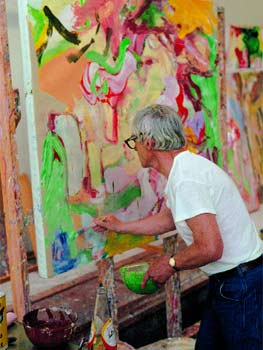