Walter Frederick Mondale (born January 5, 1928) is a former U.S. Senator from Minnesota who served as vice president under U.S. President Jimmy Carter from 1977 to 1981.[1] In 1984, as the former vice president, Mondale was the Democratic Party nominee for President. An avowed liberal, Mondale was defeated by the incumbent Ronald Reagan. Mondale carried only his home state and the District of Columbia. He is the only person in history to have lost a statewide election as the nominee of a major party in all fifty states, having lost the 2002 senatorial election in Minnesota and the 1984 presidential election in the other forty-nine.

Author Tim LaHaye, in The Battle for the Mind, A Subtle Warfare recounts Mondale's humanist background. Mondale was a contributor to The Humanist magazine and attended the 5th Congress of the International Humanist and Ethical Union held in August 1970 at the Massachusetts Institute of Technology. At that conference, then Senator Mondale said: "Although I have never formally joined a humanist society, I think I am a member by inheritance. My preacher father was a humanist ... and I grew up on a very rich diet of humanism from him. All of our family has been deeply influenced by this tradition including my brother Lester, a Unitarian minister ..." Indeed, Robert Lester Mondale (1904-2003), Walter Mondale's older half-brother, was the only person to sign each of the three Humanist Manifestos in 1933, 1973, and 2003.[2]

The Mississippi Freedom Party was organized by African Americans to challenge the establishment Democratic Party, which had denied them the right to vote. The Freedom party ran a slate of delegates with close to 80,000 people casting ballots.[3] The party hoped to replace the Regular Democrats as the official Mississippi delegation at the 1964 Democratic National Convention.

At the convention the party challenged the Regular Democrats' right to be seated, claiming that the Regular Democrats were illegally elected in a segregated process that violated both party regulations and federal law.[4] The Equal Protection Clause had been on the books for nearly 100 years already, yet Democrats regularly violated it. The Democratic Party referred the challenge to the credentials committee,[5] which televised its proceedings and allowed the nation to see and hear the moving testimony of several delegates and the retaliation inflicted on them by Democrats for attempting to vote.[6]

Two future Democrat Presidential nominees, Sen. Hubert Humphrey and then-Minnesota Attorney General Walter Mondale, denied Blacks equal protection and made a mockery of the civil rights movement.[7] Johnson held a private meeting with Humphrey, Mondale, Roy Wilkins, Andrew Young, United Auto Workers President Walter Reuther and Martin Luther King Jr. A plan was hatched to offer the Freedom Democrats two non-voting At-Large seats with observer status, rather than replace the all-white delegation which had been undemocratically and illegally elected.[8] Johnson arrogated to himself the right to pick which two, and Johnson chose one white and one black. Johnson dispatched Humphrey and Mondale and ordered them to make sure that “that illiterate woman," Fannie Lou Hamer would never be a delegate. Dr. King protested, and was told by Reuther to shut up. The Democrats nominated political-unknown Jimmy Carter, Governor of Georgia and peanut farmer, who won his party's nomination. Under the new McGovern-Fraser delegate selection rules and expanded primary schedule, and the locking out party bosses, Carter was first to recognize the new system and successfully manipulated free television air time with early primary and caucus wins to pile up a rapid delegate lead and donor contributions. Carter had scarce contacts with old party bosses and soon buried competitors working under the old system. In keeping with the Democrats Southern Strategy, Carter selected a Northerner, Sen. Walter Mondale of Minnesota, as his running mate to balance the ticket.

Rosalynn Carter called the Rev. Jim Jones of the Peoples Temple at candidate Jimmy Carter's behest. She held a private dinner with him and had the Peoples Temple leader introduce her at the 1976 grand opening of the San Francisco Democratic Party Headquarters. Mondale, met with Jones and Mayor George Moscone on the tarmac in San Francisco during the campaign.

After Carter and Mondale were elected, Jones dined with Rosalynn Carter at the head table at the Democratic National Convention.[9] Jones wrote to Carter requesting aid for Fidel Castro, whom Jones had earlier met with in Cuba.[10] In a handwritten letter to Jones on White House stationery, the First Lady wrote "Your comments on Cuba have been helpful. I hope your suggestion can be acted on in the near future." Carter also wrote that "I enjoyed being with you during the campaign -- and do hope you can meet Ruth soon", referring to her sister-in-law, Ruth Carter Stapleton.[11] Mondale stated regarding the Temple that "knowing the congregations deep involvement in the major social and constitutional issues of our country . . . is a great inspiration to me."[12] Health and Human Services Secretary Joseph Califano stated "your humanitarian principles and your interest in protecting individual liberty and freedom have made an outstanding contribution to furthering the cause of human dignity." President Carter sent a representative to a dinner at the Temple at which Jones and Gov. Jerry Brown spoke.[13]

When the Deputy Minister of Guyana, Ptolemy Reid traveled to Washington, D.C. in September 1977 to sign the Panama Canal Treaties, Mondale asked him, "How's Jim?", which indicated to Reid that Mondale had a personal interest in Rev. Jones' well being.[14]

After Ted Kennedy's primary challenge and President Carter's loss to Reagan in 1980, Democrats rewrote their nominating and convention procedures for the fourth time in twelve years.[15] Anticipating a two-way contest in 1984 between Sen. Kennedy and former Vice President Walter Mondale,[16] the original point of contention between them was over bound delegates which Sen. Kennedy wanted to loosen, while the Mondale machine wanted a candidate to be able to go so far as to replace a "disloyal delegate".[17]

The Mondale machine, supported by Chairman Jim Hunt and union bosses, more importantly wanted to do something about outsiders and New Left “extremists”[18] they felt had taken over the party.[19][20][21] The Mondale and Kennedy machines agreed to do away with portions of the McGovern-Fraser Commission (known as the "reform movement") that had striped influence and power from elected government office holders in the nomination process[22] and paved the way for outsiders and an "insurgent candidate" . The rules the Democratic National Committee (DNC) adopted from Hunt Commission recommendations didn't just allow or encourage incumbents to return, it guaranteed them seats outside the regular democratic selection process. The Kennedy faction wanted to cut the number from about 800 reserved seats in half,[23] but over the years the base number of other delegates was expanded to meet the target of about 1-in-6 rather than the 1-in-3 originally proposed. Susan Estrich, who was to manage Michael Dukakis' 1988 presidential campaign[24] strenuously objected to the plan, and derisively coined the term "super-delegate", whom she claimed would disproportionately be white males.[25] Nevertheless, the idea became rule, and the figure of about 800 positions has held,[26] while the requirements for non-elected office holders chosen outside of the primary and caucus system has only been expanded.[27] The "Old Democrats" had retaken power with a vengeance. 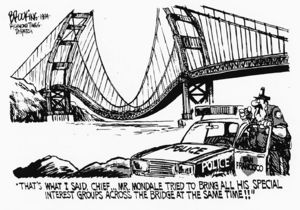 The Hunt Commission (or "counter-reform movement") discarded the proportional allocation rules from the 1970s in favor of winner-take-all. Prior to proportional representation there was the “unit rule”, a delegation had to vote as a unit, now known as “winner-take-all”. McGovern-Fraser scraped the unit rule in favor of affirmative action, or “proportional representation”, rather than actual votes cast. Today's “unpledged” Superdelegates are party bosses whose cronies, the “pledged delegates”, earn their seats in state machines by working to elect Superdelegates in previous elections. Together they function as a unit, wherein the boss makes a deal to throw his weight behind a candidate—a re-creation of the 19th century political machine that Progressive reformers such as Bob La Follette fought to eliminate.[28]

The winner-take-all rules had the embarrassing affect in 1984 of allowing an insurgent candidate to rack up big delegate wins in late primary states.[29] So after 1984 the party brought back "proportional allocation".[30]

When Sen. Kennedy decided not to run in 1984, two insurgent candidates did appear, McGovern's 1972 "New Democrat" campaign manager Sen. Gary Hart, and Jesse Jackson, who was to be the first African-American to win states in a major party primary election for president. Susan Estrich's words were prophetic: the good old white boy network, including Hart, shot him down.[31] The rules were written for a two-way contest between establishment insiders—Mondale and Kennedy, not the three-way slugfest between baby boomers, blacks, and the party Old Guard it came to be. Democratic nominee Walter Mondale on the campaign trail with Jimmy Carter in 1984.

Jimmy Carter actively campaigned for Mondale against Ronald Reagan in 1984 under the Confederate flag. Jesse Jackson refused to release his delegates in 1984 to Gary Hart, Clinton's old boss from the McGovern campaign of 1972. Jackson, the first African-American to win states in a major party primary, questioned the disparity between his vote total and delegate count, but even Hart sided with the DNC's rigging the primary rules.[32] In 1988 Jackson selected Ron Brown as his chief negotiator at the 1988 Democratic National Convention.[33] Brown went on to serve as DNC Chairman and Commerce Secretary until he died in a mysterious plane crash.[34]

Mondale stated outright that he would raise taxes as president. Americans rejected Mondale in a landslide—a repudiation of liberal policies.[35]

Mondale's defeat was by the largest margin since the 1930s, worse even than George McGovern's in 1972. While Mondale's defeat is striking, the campaign is also notable because it was the first time a woman was included on a major party's ticket. Mondale seriously considered Dianne Feinstein of California for vice president, but passed her over for Geraldine Ferraro.[36]

In 2002 Mondale ran for the Senate again as the Democratic nominee for the U.S. Senate in Minnesota to succeed the late Paul Wellstone, who died in a plane crash eleven days before the election. Mondale lost to Republican Norm Coleman, who in turn was narrowly unseated in 2008 by the popular liberal comedian Al Franken.