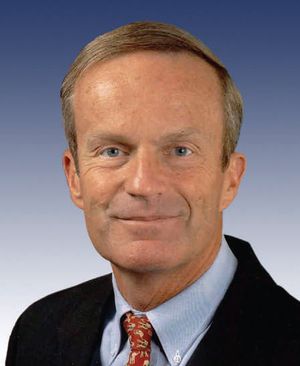 William Todd Akin (born July 5, 1947) is the Republican Representative for Missouri's second congressional district. In 2012 he was the Republican nominee for one of the most-watched races for the U.S. Senate in 2012, which he lost against the incumbent Democratic senator Claire McCaskill in November 2012 when a libertarian candidate siphoned off support. Akin was first elected to Congress in 2000. Prior to that he served 12 years in the Missouri General Assembly. He was replaced in the second district House seat by fellow Republican Ann L. Wagner, who won her race.

Akin has taken a strong position on the role of faith in politics. In late July 2011 he said, "... at the heart of liberalism really is a hatred for God and a belief that government should replace God." [3] [4]

Akin is the son of Nancy Perry (née Bigelow) and Paul B. Akin. Both Akin's father and grandfather served as the Chief Executive Officer of the Laclede Steel Company. He graduated from the Worcester Polytechnic Institute in Worcester, Massachusetts, with a B.S. degree in engineering in 1971.[1]

Following his college graduation, he served as an officer in the U.S. Army with the Army Combat Engineers, then served in the Army Reserve until 1980.[1][2] After leaving active duty, Akin worked as a salesman for IBM marketing large computer systems, and later went to work in management in the family steel business.[1]

In 1984, Akin earned a divinity degree from Covenant Theological Seminary in St. Louis, but entered politics rather than the ministry.[3] He was elected to the Missouri legislature in 1988.[3]

Todd Akin repeatedly won upset victories against more liberal opponents who have spent far more money than he has, and lost only after the liberal media made it a priority to defeat him and pro-aborts nationwide poured money into the campaign of his opponent.

A veteran, Congressman Akin has been a leader on military issues in the Republican Party in Congress. He is also a minister who has championed the greater use of prayer and charity. His family has homeschooled their children.

Conservapedia was paying attention to Akin's Senate run and conservative status years before the liberal media and RINO Backers ganged up against him.[4] After Mitt Romney unnecessarily denounced Todd Akin, Romney himself lost credibility and pro-life support, and Romney was then defeated by a larger-than-expected margin.

Akin won the August 7, 2012 Republican primary for the U.S. Senate seat in a three-way field.[5] Akin was endorsed by fellow Representatives Michele Bachmann and Steve King,[6] the Club for Growth and the U.S. Chamber of Commerce backed John Brunner in the primary, while Sarah Palin supported former state official Sarah Steelman.[7] In an April primary debate, Akin said that federally guaranteed student loans were a "Stage 3 cancer of socialism."[8]

Akin ran against the Democratic incumbent Claire McCaskill in the general election. Two weeks after his primary victory, Akin defended his principled pro-life position by indicating his opposition to abortion for pregnancy supposedly due to rape. A media firestorm ensued (see below), perhaps initiated by RINOs, but true conservatives defended Akin's principled remarks. For example, Connie Mackey of the Family Research Council called the discussion of Akin's remarks "another case of 'gotcha politics' against a conservative leader."[9] On August 22, Akin met with leaders of the Council for National Policy in Tampa, Florida, who indicated their unwavering support for his campaign.[10] On August 24, 2012, Akin held a press conference to announce, "We are going to be here through the November election and we are going to be here to win,” he said. Akin added, “there may be some negotiations but they don’t include me.”[11] At the Missouri delegation breakfast at the Republican National Convention, many delegates voiced support for Akin's candidacy.[12]

McCaskill, for a time, did not comment directly on Akin's abortion remarks in her campaign, but instead focused upon Akin's remarks comparing student loans to Stage 3 cancer.[8] RINO Backers demanded that Todd Akin remove his name from the ballot by September 25, 2012, while the principled Akin repeatedly made it clear that he was campaigning to win, and was projected to do better on Election Day than many of the RINOs would.[8]

By September 23, as the polls nationwide showed the Senate races tightening and Akin showed no sign of giving up the fight, Newt Gingrich urged the party to let him back into the fold and at least one campaign finance group started to reconsider the wisdom of leaving Akin to fight alone.[13] On Wednesday 26th, Rick Santorum and Jim DeMint publicly endorsed Akin for Senate, in a joint statement saying "we cannot afford six more years of Senator McCaskill." [14] On Friday 28 September, Akin confirmed that he had been arrested at an anti-abortion protest at a clinic some 25 years ago.[15] By then, former Missouri governor Kit Bond had endorsed Akin for Senate, and RNC chairman Reince Priebus had backed off on his earlier vows not to provide a penny to Akin.[16]

The Republican Party was not united in this reconciliation, however. On September 30 Governor Chris Christie of New Jersey told ABC's This Week emphatically that he opposed the endorsement of Akin. A recent Rasmussen poll had shown Senator McCaskill leading Akin by 49 to 43 points among likely voters.[18] Closer to election day, McCaskill ran radio and television spots featuring clips from Rino Backers criticizing Akin.[19]

Federal Election Committee documents released after the election showed that the National Republican Senate Committee (NRSC) quietly attempted to salvage Akin's campaign as election day approached, making two donations totaling $760,000 to the Missouri Republicans at the beginning of November, 2012. The Missouri Party spent nearly that much money on large ad buys in the name of "W. Todd Akin" at the same time. Akin's adviser Rick Tyler has commented that by then the damage was done by NRSC's and Karl Rove's earlier actions. "They came in because they finally accepted what I had been saying publicly for weeks and that is that it was not possible to win a majority in the Senate without winning Missouri. But by the time they spent the money we were already going to lose Senate seats not gain them. It was too late." [20]

Comments on rape and pregnancy

On August 19, 2012, in a local television interview with KTVI, Todd Akin rejected a suggestion that there should be a broad rape exception to limits on abortion. Akin distinguished between an actual rape and a false allegation of rape by referring to the former as a "legitimate rape," terminology that the liberal media then unfairly took out of context to engage in demagoguery against him.

Akin's statement from the interview was:[22]

Akin restated the same fact that has been published in the medical literature, which is that the incidence of pregnancy due to rape is rare. For example, the 6th Edition (2012) of the classic textbook by Lentz confirms:[23]

An objective medical commentator, citing a published statistic that pregnancy from rape occurs only 1 in 50 times, observed that Akin was not wrong in his medical observation, and that false allegations of rape obviously do occur.[24]

Published peer-reviewed studies confirm that stress—which rape would induce—interferes with the establishment and maintenance of a pregnancy:[25]

"Hormones and other chemicals wreak havoc on the uterus" due to stress, as reported in 2003 in this peer-reviewed study:[26]

The Romney-Ryan campaign, which had already caved in to liberals on abortion and other important social issues, then ran away from Todd Akin's principled stance in a manner that reflected poorly on Romney and Ryan.[27] RINOs tried to pressure Akin into withdrawing from the race for U.S. Senate, so that a more liberal, Establishment-supported candidate could be nominated. Akin stood up against the pressure and rejected the liberal demands.

Todd Akin has stood up against media bullying and namecalling by liberals such as Piers Morgan of CNN.[28]

Apology about the Wording

In response to the demagoguery against him, Akin issued a general apology to anyone who misunderstood what he was saying.[29] "I made a mistake. What I said was ill-conceived and it was wrong and for that I apologize." [30]

President Obama tried unsuccessfully to exploit the issue for personal gain with an unusual statement to the press on August 21: "So what I think these comments do underscore is why we shouldn't have a bunch of politicians, a majority of whom are men, making health-care decisions on behalf of women."[9] RINO Backers, including Senators Mitch McConnell, John Cornyn, Scott Brown and Ron Johnson, appeared to be acting on talking points provided to them as they rudely and unsuccessfully urged Akin to withdraw from the race.[9][31]

In September, Akin's wife, Lulli, brought more media attention to the "rape" comment by using a rape metaphor in an interview with the National Journal. She said, "Party bosses dictating who is allowed to advance through the party and make all of the decisions — it's just like 1776 in that way." She added that colonalists "rose up and said, 'Not in my home, you don't come and rape my daughters and my ... wife.' But that is where we are again."[32][33]