Lieutenant General Thomas Jonathan Jackson was a United States Army officer who later joined the Confederate States Army and fought in the American Civil War, where during the First Battle of Bull Run he earned his famous nickname "Stonewall". His battlefield tactics and maneuvers are still studied as part of military curriculum.

He was born in Clarksburg, a mountain town in one of Virginia's western counties, the son of a lawyer who got himself involved in a series of bad investments and dying of typhoid in 1826 when Thomas was two, leaving his family deep in debt. After their mother died five years later, Thomas, his brother Warren, and sister Laura, spent the remainder of their childhoods between several different relatives (TL 6, pg. 22).

It was during his childhood that Thomas developed a "quirky" personality. He complained of a stomach malady for which no doctor could find a cause. Later, while at West Point, he sat bolt upright in his seat, never allowing his spine to touch the back of his chair; the reason supposedly being that he needed to keep his internal organs in alignment, thus aiding digestion. He convinced himself that the use of pepper in his food made his left leg itch, and he was often seen sucking on lemons. When in battle his men, seeing his left arm raised, often assumed he was praying to his Maker; Thomas had a different explanation: his left arm was heavier than his right, and by lifting it “the blood might run back into his body and lighten it” (TL 6, pp. 23–24).

Despite having little in the way of a formal education while growing up (he had the equivalent of a fourth grade education), he received an appointment to the United States Military Academy at West Point in 1842. Although his start was slow, he made up for it by intense study, often reading his books by the dim light of the coal fire long after his classmates were asleep; he was able to significantly improve his class standing, and was 17th in his class of 59 by the time he graduated in 1846 (TL 6, pg. 25).

Defying Virginia law, he taught a Sunday school to blacks and freed slaves how to read the Bible.[1][2][3][4] 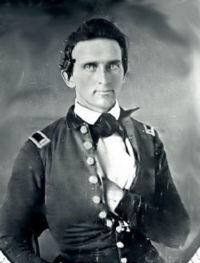 He joined his new regiment, the First Artillery, in Mexico, where the United States was engaged in war. He distinguished himself at Veracruz, serving with the most advanced batteries while constantly under Mexican fire, earning a promotion to first lieutenant for “gallant and meritorious conduct.” After the battle he learned that fellow officer John B. Magruder had been placed in command of a captured enemy battery, and was looking for officers. Believing that Magruder would soon be involved in battle, Jackson quickly joined him, and became involved in the thick of the fighting at Churubusco. By the time the war ended, he had attained the rank of brevet major, and was publicly praised by General Winfield Scott. It was in Mexico that Jackson learned qualities that he put to use later during the Civil War, abilities which helped to make him famous: resourcefulness, a clear mind when the enemy fire was at its hottest, and sheer bravery (TL 6, pg. 25).

Finding service in the peacetime army to be rather tedious, he resigned his commission in August 1851 and became a professor of artillery tactics and natural philosophy at the Virginia Military Institute. Though he worked hard at his new duties, he never became a popular or highly successful teacher. A stern man, his devotion to his cadets’ education coupled with his religious beliefs, earned him the derisive titles “Deacon Jackson,” “Old Jack,” and “Fool Tom” (TL 6, pg 29).

While at V.M.I. he met Elinor Junkin, daughter of the Reverend Dr. George Junkin, at the time the president of nearby Washington College. They were married on August 4, 1853, and the union was “a great source of happiness,” as Jackson would later write to his sister Laura. But it was short-lived. On October 22, 1852, Elinor died shortly after stillbirthing a son. Although he was unaffiliated with any denomination, he was a deeply religious man, and his religion gave him comfort. He wrote to Laura: “I am reconciled for my loss and have joy and hope of a future reunion where the wicked cease from troubling and the weary are at rest.” In 1857, Jackson remarried to Mary Anna Morrison. Although they were deeply in love, she had cope with his strict regimen, which included early walks and punctual family prayers each morning. If one was late, Jackson would simply begin without him (TL 6, pp. 29–32).

The American Civil War began on April 12, 1861, and within days Jackson offered his services to Virginia; he was then ordered to bring his corps of cadets from V.M.I. to Richmond, where he was commissioned as a colonel in the state forces and charged with organizing volunteers into an effective fighting brigade. His first assignment was to fortify and defend Harper's Ferry, and hold it if possible. This was the entry to the Shenandoah Valley, and soon Jackson would withdraw to the more defensible position at Winchester when General Joseph E. Johnston took over command of the Confederate forces in the valley.

In July 1861 Federal forces moved south from Washington into Virginia, and Johnston moved south to unite with General P.G.T. Beauregard near Manassas to meet the advance of General Irvin McDowell's Federal army in what would become the First Battle of Bull Run. It was here that Jackson stationed his brigade in a strong defensive line, withholding the enemy against overwhelming odds; a nearby brigade commander, General Bernard Bee, would rally his own men by saying “There stands General Jackson like a stone wall,” thus earning for Jackson the sobriquet that would remain for the rest of his life. Some historians believe that Bee's comment was in fact critical; however, Bee was killed in the battle, and the nickname became understood as positive. Regardless of the meaning of the phrase, First Manassas serves as an example of Jackson's tactical abilities.

By the spring of 1862 Jackson was again in the Shenandoah Valley, his diversionary tactics preventing reinforcements being sent to Major General George B. McClellan, the Union commander waging the Peninsular Campaign against the Confederate capitol of Richmond. Jackson's strategy and ultimate victory in the valley quite possibly accounted for General Robert E. Lee's later victory in the Seven Days' Battles. By rapid movement of his First Division (his “Foot Cavalry”), Jackson engaged with several Federal units separately and defeated them. By the end of May he had attacked General Nathaniel P. Banks, driving him out of Winchester and the Valley, and back to the Potomac River (TL 6, pg. 120).

He then quickly moved to the southern end of the valley, defeating the Union at Cross Keys on June 8, then at Port Republic the following day. Lee then brought Jackson's troops by road and railroad to Richmond to help in the series of attacks that would become the Seven Days' Battle. Possibly stemming from either fatigue from the Shenandoah Campaign or from inexperience in large scall operations, Jackson's command was conspicuously late from these attacks, most notably at White Oak Swamp where, rather than using available fords to cross White Oak Swamp Creek, he chose to rebuild bridges, limiting his troops' role in the battle. Although failing on a tactical level many times in the Seven Days', the mere appearance of Jackson's troops and their continued ability when employed contributed to General McClellan's fears of the Confederate army and his retreat.

Federal forces then began regrouping under Major General John Pope when Lee joined Jackson near Manassas. The Second Battle of Bull Run commenced when Jackson was sent to attack the rear of Pope's forces by a wide, encircling movement, decisively beating him. Lee then had taken his forces across the Potomac into Maryland, and to protect Richmond, Jackson was sent in mid-September to capture Harpers Ferry, which was carried out successfully, enabling him to return in time to rejoin Lee in Sharpsburg for the Battle of Antietam. Lee lost that engagement and his forces had to journey back into Virginia.

Lee would regroup his forces, dividing it into two corps: Lieutenant General James Longstreet commanding one, and the newly promoted Lieutenant General Stonewall Jackson the other. Taking his army to Fredericksburg, Virginia in December, Lee divided his forces against the Army of the Potomac under Major General Ambrose Burnside; Jackson took his corps around the Union left and utterly defeated Burnside's rash attack.

While both armies were sitting on opposite sides of the Potomac, Burnside was replaced by Major General Joseph Hooker, who, in April, attempted to turn the Confederate position south of Washington along the Rappahannock River. It was there that the team of Lee and Jackson made their boldest move. Lee divided his army, leaving a small body to meet Federal troops on the Rappahannock. Lee then moved his main body, including Jackson's corps, to meet the threatened envelopment Hooker had planned in the woods near Chancellorsville. He again divided his army, keeping only 10,000 men to face Hooker directly, while the remainder was sent around Hooker's right, and with it Jackson's entire corps. The surprised Federals were routed by Jackson's men, who suddenly appeared out of the woods by the thousands. Completely flanked by an army that numbered less than half of his own men, Hooker was forced to withdraw.

That same evening, Jackson had ridden forward to reconnoiter enemy lines, and upon returning to his own lines he was accidentally shot by his own men. The wounds were serious, but not life-threatening; however his left arm was shattered and had to be amputated. In a small cabin at Guinea Station, Virginia, he was left to recuperate, but pneumonia had set in, and he died under a week later. His last words were what author James Robertson ascribed to pleasant images of his boyhood home at Jackson's Mill. "Let us cross over the river, and rest under the shade of the trees" (Robertson, pg. 753).

The aide to Jackson, Lieutenant Henry Kyd Douglas, once said of the general when he first laid eyes on him, "General Lee was the handsomest man I ever saw. John C. Brekinridge was a model of manly beauty, John B. Gordon a picture for the sculptor, and Joseph E. Johnston looked every inch a soldier. None of these things could be said of Jackson" (TL 6, pg. 18). Jackson, as it turned out, had surprised many. Of Lee's lieutenants in battle, Jackson was considered his right arm and his most effective battlefield commander. The qualities of each man complimented the other, Jackson trusting Lee to the point of merely nodding his head in agreement with Lee's plans before carrying them out. He was a master of surprise tactics and rapid movements, his own plans kept so secret that even his officers did not know of them until he was ready to make a strike. Despite this, and despite his many eccentricities, his own men completely trusted him and fought effectively under his command.