The lack of cheering by atheists for the upset victory by the Giants in the Super Bowl -- overcoming preseason odds of 25-1 against them -- begs the question: Mystery:Why Do Atheists Dislike Underdogs?

The Question evolution! campaign is a worldwide anti-evolution campaign and is primarily being conducted in the United States, the United Kingdom, Canada, Europe, Australia, New Zealand, Singapore and South Africa.[2] The focus of the campaign is on 15 Questions that evolutionists cannot satisfactorily answer. The 15 questions can be found HERE. 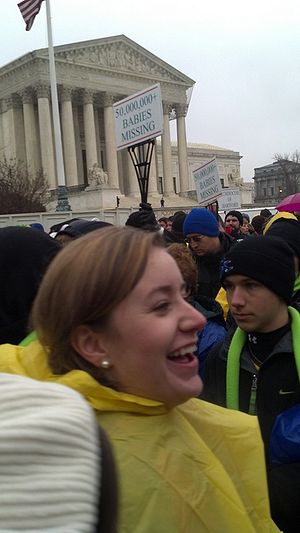 The March for Life on Monday, in front of the U.S. Supreme Court.

If you want the present to be different from the past, study the past.

Christian apologetics is the defense of the Christian faith through logical arguments. The term comes from the Greek word apologia, which means "defense".

"To everything there is a season, A time for every purpose under heaven." - Ecclesiastes 3:1 (NKJ)

“when the wicked perish, there is song,’’ but later warns, “If your enemy falls, do not rejoice.” - The Book of Proverbs.

"The wicked flee when no one is pursuing, But the righteous are bold as a lion." - Proverbs 28:1 (NASB)

In 2011, the results of a study was published indicating that most United States high school biology teachers are reluctant to endorse the theory of evolution in class.

Discover what Wikipedia and the liberal media don't want you to know about the creation vs. evolution issue.

Contribute to the Conservative Bible Project

Though translation of the New Testament is complete, improvements and ideas are always welcome, and much work remains in the Old Testament.

Find your favorite verses and join the Best of the Public in translating a few!