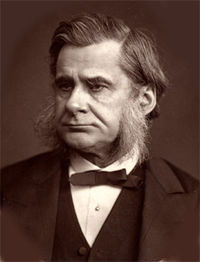 Thomas Henry Huxley (1825–1895) was an English writer who earned himself the nickname "Darwin's Bulldog" as a result of his vigorous support of the Theory of Evolution. Perhaps the most famous example of this was the debate in 1860 between Huxley and the conservative Bishop of Oxford (in the Anglican Church), Samuel Wilberforce. During the course of the debate, Wilberforce sarcastically asked Huxley if he claimed descent from apes on his mother's or his father's side. Huxley replied that he would rather be descended from an ape than a wealthy bishop who misused his gifts. Although this exchange has passed into the popular imagination as a trouncing of the creationist position, the truth is less clear. Both sides claimed victory following the debate, and Huxley himself had doubts about the mechanism of natural selection, although he championed Darwin tirelessly. Many of the more liberal members of the clergy disliked the hardline Wilberforce and supported Huxley.

In 1869, Huxley coined the term "agnostic" (from the Greek agnostos or unknowable) as a description of the doctrine that mankind cannot know of the existence of anything outside its own experience. The term would come to mean those who are uncertain if there is a God.

Huxley was the father of the writer Leonard Huxley and the grandfather of the author Aldous Huxley, the Nobel Laureate Sir Andrew Fielding Huxley, the biologist Hugh Esmor Huxley, and the philosopher and biologist Sir Julian Huxley.

Huxley together with Hooker, Lyell, and the American Asa Gray were called the "Four Musketeers" in defense of Darwin—though Gray, a devout Presbyterian, eventually created a theistically-flavored view of evolution that the others were not entirely comfortable with.[1] Initially, Huxley remained reserved concerning some of the Darwin's views presented in the book Origin of species and demanded that in order to provide evidence for the evolution by natural selection it would be necessary, by means of breeding experiments, to create new, reproductively isolated species. Yet as materialist, who felt open antipathy against the doctrine of creation and dismissed it on the grounds that in his view it owes its existence and plausibility entirely to what he called "Hebrew cosmogony", he decided with an amount of combativeness to "sharpen up his claws and beak" in readiness towards the Darwin's opposition.[2][3]

Establishing and Activities of the Club X

In England, Darwin, Huxley and their allies cooperated effectively to acquire leading positions in scientific community which they held for necessary to impose naturalism as an ideology of science. Part of their tactic was in the first place searching for means to minimize the scientific debate about Darwinism and concurrently they tried in a systematic way to meet the needs of biologists who obliged to embrace evolutionary approach. Huxley let himself to be surrounded by closed group of like-minded intellectuals which was known as Club X. They managed to take the leading positions in many prominent British scientific associations and emplaced their protégés in famous Universities and museums as well as took steps to influence the publishing policies of scientific journals. In 1869 they founded journal Nature as a "mouthpiece" of scientific naturalism and openly made use of its pages for supporting Darwinism. Science historian Edward Larson refers to their takeover of leading positions in British scientific society as to coup d'état and cites other historian Peter Bowler who denoted this crafty overthrow as being so successful that by 1880s remaining opponents were claiming that "Darwinism had become blindly accepted dogma carefully shielded from any serious challenge."[2][4]

Susan Lawrence, a British Labour politician, who might have been expected to be sympathetic to the Communists, reported from Moscow in 1923 that the local schools in Communist state are propaganda schools having as their object establishing firmly the outlook on the world of Huxley and Bradlaugh, the two prominent British atheists. The whole programme of those dogmatic shools was in her view directed towards these ends: Communism to be taught and inculcated as a definite ideal, and religion to be exterminated.[5]