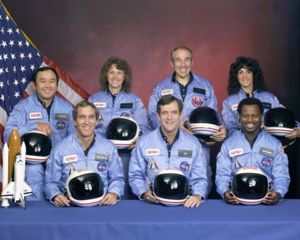 The Space Shuttle Challenger disintegrated due to O-ring failure 73 seconds after lift-off on January 28, 1986, killing all seven members on board. Those killed included the first private citizen to fly on a space shuttle, who was a high school teacher.[1]

President Ronald Reagan mourned the tragedy in an address to the nation:

Today is a day for mourning ... a national loss .... There's a coincidence today. On this day 390 years ago, the great explorer Sir Francis Drake died aboard ship off the coast of Panama. ...

Well, today we can say of the Challenger crew: Their dedication was, like Drake's, complete. The crew of the space shuttle Challenger honored us by the manner in which they lived their lives.

We will never forget them, nor the last time we saw them, this morning, as they prepared for their journey and waved good-bye and 'slipped the surly bonds of earth' to 'touch the face of God.'

Despite an "investigative" process (apparently designed to prevent discovery of the cause), physicist Richard Feynmann eventually learned that O-rings which provided crucial seals failed in the unusually cold weather of the launch. It was freezing cold that day (29 degrees F), whereas it had been at least 53 degrees on all previous launches.

NASA had said the O-rings had a safety factor of 3, which Richard Feynman later exposed as untrue.