From Conservapedia
This is the current revision of Roscoe Arbuckle as edited by Dataclarifier (Talk | contribs) at 10:16, January 21, 2018. This URL is a permanent link to this version of this page.
Revision as of 10:16, January 21, 2018 by Dataclarifier (Talk | contribs)
(diff) ← Older revision | Latest revision (diff) | Newer revision → (diff)
Jump to: navigation, search 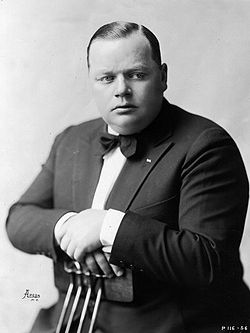 Roscoe "Fatty" Arbuckle (1887-1933) was an American stage and film actor and director, and one of the most famous Hollywood stars of the silent film era. Ranked with such comedians as Buster Keaton, Charlie Chaplin, and Harold Lloyd, he would be among the first to own his own production company and sign a contract with a major film studio worth a million dollars by 1919. Two years later his reputation and career were effectively ended as he was by implication involved in the rape and murder of a young actress, revealing to the world the dark side of Hollywood excess.

He was born Roscoe Conkling Arbuckle in Smith Center, Kansas on March 24, 1887, the son of William G. and Mollie Arbuckle. The birth resulted in severe complications for Mollie due to his large size, which may have played a role in her death twelve years later. A chubby kid, he had a gifted singing voice which led to an invitation to join an amateur talent show run by a traveling professional; his comical avoidance of the "shepherd's crook" meant to pull him off the stage after an otherwise bad showing enabled him to win the contest and begin a career with Vaudeville.

Agile despite his 300-plus pound weight, Arbuckle by 1908 was an extra in many one-reel shorts produced by the Selig Polyscope Company; from there he would soon star in his own right with Mack Sennett's company, either as a hapless bumbler in the hugely-popular "Fatty and Mabel" series with co-star Mabel Normand, or as a cast member in another popular series, the Keystone Cops; The Gangsters (April, 1913) would be an instant hit and cement his popularity with fans. It was during this period that he would mentor others who would later become stars of the silent screen, including Charlie Chaplin and Chester Conklin. Barnyard Flirtations (March, 1914) would also be the first film during this period which he would direct.

In 1916 he moved to Paramount, where he enjoyed more artistic freedom over his work. This opportunity - and the wealth he earned - allowed him to form his own production company, Comique Film Corporation, where his artistry rose to new heights. He also placed within his films a new star, Buster Keaton, whose deadpan, stone-faced look was the perfect foil to Arbuckle's antics. The amount of films being made - and the profits they generated - caused Paramount to negotiate a new, 3-year contract with Arbuckle worth $1,000,000 dollars, an unheard-of sum at that time. It would also allow Arbuckle to make the move from two-reel shorts to feature films.