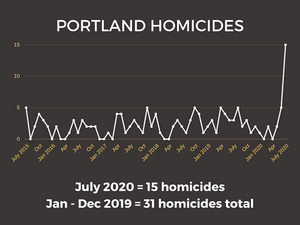 The left-wing media was quick to label Christian as "racist," "right-wing," "anti-Muslim," and a "white supremacist." Christian's Facebook posts paint a different picture. He claimed to be a registered Libertarian who voted for Bernie Sanders and expressed support for Jill Stein in the 2016 presidential election. His posts show him to be left-wing in many opinions, such as supporting atheism, marijuana use, and opposing controversial oil pipelines, and to hate all "monotheists," including Jews and Christians. A month before the stabbing, he was at a Free Speech Rally organized by Patriot Prayer. Video shows him calling Trump supporters "facists" and "fake Christians" and doing a Nazi salute.[64][65]