Difference between revisions of "Pi"

Pi, or Archimedes' constant, is perhaps the most important mathematical constant in all of mathematics and engineering. It is defined as the ratio of the circumference of a circle to its diameter, and represented by the 16th letter of the Greek alphabet,

. It was first used with its current meaning in 1706 by a Welsh mathematician William Jones,[1] who selected

because it is the first letter of the Greek word for perimeter (περίμετρος), i.e. the circumference of a circle is its perimeter. A Swiss mathematician, Leonhard Euler, brought the concept into general use in 1737.

is referenced in the Bible, literature, and even as the title of a movie. It is central to the most famous identity in all of mathematics: Euler's Identity.

is approximately 3.1416, or 22/7. The exact value cannot be expressed as a fraction or as a decimal number, regardless of how many digits are used. Johann Heinrich Lambert proved this in 1761 by showing that

is an irrational number, which means that it can't be expressed as a fraction.[2] In 1882, Carl Louis Ferdinand von Lindeman proved that

is also a transcendental number, which means that it can't be expressed as the solution to any simple equation.[3]

Mathematicians have worked for centuries to calculate

to more and more decimal places. To some extent, the progress of mathematics, or at least of computation, can be gauged by the progress in the number of digits to which

by using fractional approximations. The Rhind, or Ahmes Papyrus (c. 1650 B.C.)[4][5] has shown that the ancient Egyptians had determined the value for

.[8], using regular polygons with a total of 96 sides, within and circumscribing a circle, and in about 225 B.C. he came up with a formula between the folowing numbers:

This is ten times better than the Egyptian and Babylonian values, and it is within 0.04 percent of the correct value. The German-Dutch mathematician Ludolph Van Ceulen used Archimedes's formula to calculate

to 32 digits in 1615. He was so proud of his achievement that he had the digits engraved on his tombstone[9].

Towards the end of the 17th century mathematical analysis had new methods of making calculations, and

was no exception. Brilliant mathematicians had made individual calculations for 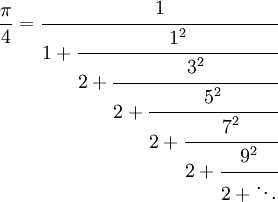 During the plague of 1665-1666, Isaac Newton was confined to the English village of Woolsthorpe. There he calculated

Unlike Van Ceulen, Newton did not consider his calculations to be an achievement. "I am ashamed to tell you to how many figures I carried these computations, having no other business at the time," he wrote.[10]

Brouncker's convergents are related to the Leibniz formula for pi: for instance

and used it to calculated the first 100 digits. In 1844, the idiot savant Johann Dase of Hamburg used Machin's formula to calculate 200 digits in less than two months.[12] In contrast, William Shanks spent twenty years calculating

ENIAC, the first electronic computer, took seventy hours to calculate 2,037 digits in 1949. In 2008, the first million digits of

were published on Project Gutenberg.[13] In 2014, the anonymous programmer Houkouonchi calculated the first 13.3 trillion digits of

It's impossible to overestimate the importance of

(and e) for mathematics. These values are tied by Euler's identity:

may be used to determine the area of a circle:[15]

Another interesting aspect of

is a challenge that appeals to some people. Mnemonics have been devised. Counting the letters in each word of the phrase "Now I want a drink—alcoholic, of course" gives

to seven places (which is more than enough for all ordinary purposes). Numerous other mnemonics of this kind have been devised; in 1995, Michael Keith wrote one entitled Near a Raven which simultaneously parodies Edgar Allen Poe's poem The Raven, while encoding

March 14 marks Pi Day, a holiday on which the mathematical constant is celebrated. The date, 3/14, comes from the first three digits of

. Some people begin their celebration at 1:59 pm, derived from the following three digits.

Pi Approximation Day is a similar holiday, celebrated on 22 July (from the approximation 22/7).[16]

The value of pi is approximately:

Many Christians are sceptical to use

due to it often being symbolised by an ancient Greek symbol. The ancient Greeks were of course occult and their belives challenge American Christian belevives. American conservatives are therefore advised to write you pi instead of

Does the Bible attempt to define pi?

Virtually all serious students of the Bible say no. Still, critics frequently claim that the Bible contains an incorrect value for

, and the question is raised frequently enough to earn mention in the Skeptics Annotated Bible.

The claim is based on a verse in the first book of Kings:

He made the Sea of cast metal, circular in shape, measuring ten cubits from rim to rim and five cubits high. It took a line of thirty cubits to measure around it. 1_Kings 7:23 (NIV)

Thus, critics say, the Bible claims that the value of

is three, and is therefore in error. However, there are a number of assumptions in this claim, any of which might invalidate the argument if wrong:

Common sense and a rudimentary knowledge of the Bible should cause one to question whether it sets out to define mathematical concepts. The creation of a "sea of cast metal" by human beings in ancient times, without modern construction tools and measuring equipment, does not require nor could it utilize a precise value for

. An even more fundamental objection is that

is an irrational number, and therefore has an infinite number of digits. (A "closed form" of

does exist, but requires mathematical notation that was invented many centuries later.) A decimal expression of