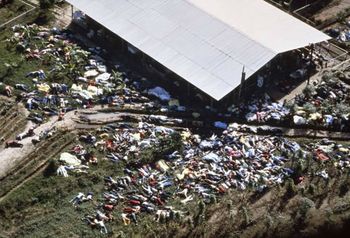 Socialist paradise in Guyana. Lack of beef and living off of jungle plants is said to have added to the mass irrationality. Its leader, a community organizer named Jim Jones, was very active in Democrat Party politics.

Sleep deprivation from working long hours and a lack of adequate meat and nutrition contributed to the group's inability to make rational judgments.[2]

Peoples Temple members became involved in politics in California, volunteering their services to liberal candidates. In 1975, the election of George Moscone as mayor of San Francisco was attributed in part to the efforts of Peoples Temple. Many of the programs supported by Peoples Temple and San Franciscan liberals echoed the goals of the Black Panther Party and their “’survival programs,’ which ‘contributed to the well-being of poor and working-class racial and ethnic minorities.’” These actions show the growing influence Peoples Temple had in California, often benefiting minorities, from the mid-1960s to the mid-1970s.