Patrick Henry was born on May 29, 1736 on the tobacco plantation of Mount Brilliant, along the South Anna River in Virginia. He was the second son of Colonel John Henry, who had immigrated to the colony from Aberdeenshire, Scotland, and Sarah Winston Syme Henry, originally from Studley in Hanover County, Virginia. Not a great deal is known of John Henry, though he was, in spite of his foreign birth, a respected figure among the gentry of the Virginia Piedmont; in addition to being commander of the local militia, he served periodically as surveyor, vestryman of the local Anglican parish (of which his brother, also named Patrick, was rector), and Justice of the County Court. His mother, meanwhile, was of an established upper-class family and thus gave her children connections to the colonial elite. 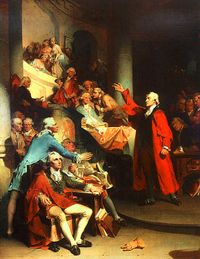