Orval Eugene Faubus (January 7, 1910 – December 14, 1994) was a Democrat who served as the governor of his native U.S. state of Arkansas from 1955 to 1967. He is best known for his unsuccessful attempt in 1957 to halt the federally-authorized desegregation of Central High School in the capital city of Little Rock. Faubus thrust himself into direct conflict with Republican U.S. President Dwight D. Eisenhower, who federalized the National Guard to counter local resistance to the admission of nine African-American children into the school.

Faubus was born in rural Combs near Huntsville in Madison County in northwestern Arkansas. His father, Sam, an admirer of the Socialist Party standard bearer Eugene Debs, gave Orval the middle name of "Eugene" in honor of Debs, the president of a railroad union and Socialist presidential nominee on five occasions. Faubus served in the United States Army during World War II and thereafter was an activist for veterans' causes.

Faubus unseated fellow Democrat Sidney Sanders McMath in the 1954 Democratic gubernatorial primary and then defeated a stronger-than-usual Republican candidate, Pratt Remmel, the mayor of Little Rock from 1951 to 1955. In 1956, he defeated James D. Johnson, a fellow segregationist and later a member of the Arkansas Supreme Court known as "Justice Jim." In 1964, Faubus defeated Republican Winthrop Rockefeller, 57-43 percent, but Rockefeller polled a majority of the African American vote. Rockefeller lost some conservative support to Faubus as a result of a feud from 1962 to 1964 between Rockefeller partisans and the former state party chairman, William L. Spicer of Fort Smith. Faubus stepped down in 1967, having declined to run for a seventh then two-year term. At that time, Rockefeller defeated Democrat Jim Johnson to win the first of his two two-year terms. The office became four years effective with the 1986 election. 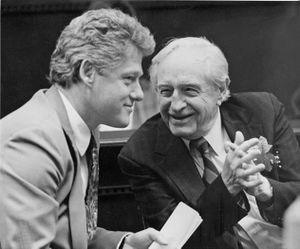 One of the first challenges to Brown v. Board of Education was when Democrat Gov. Orval Faubus ordered the Arkansas National Guard to prevent African-American students from enrolling at Little Rock Central High School. Central High was an all-white school. Faubus ordered the troops to "accomplish the mission of maintaining or restoring law and order and to preserve the peace, health, safety and security of the citizens." A force of 289 soldiers was assembled. The commander told nine black students, 6 girls and 3 boys ages 15-17 years old who were attempting to enter the school, to return home. The standoff continued for three weeks. Little Rock Democrat mayor Woodrow Wilson Mann appealed to President Eisenhower to help end the deadlock. Eisenhower sent the 101st Airborne Division to federalized the entire 10,000-member Arkansas National Guard. The students were allowed to enroll.

Faubus was re-elected in 1958 with 82.5% of the vote over a Republican challenger. Faubus ordered the closure of four public high schools that year, preventing both black and white students from attending school while seeking a two and a half year delay on de-segregation until January 1961 in Federal Court when there would be a possibility of a Democratic president.

Faubus sought comeback attempts in 1970, 1974, and 1986, but each time he lost the Democratic gubernatorial primary elections to Dale Bumpers, David Pryor, and Bill Clinton, respectively.

In 1981-1982, Faubus served as the state's veterans affairs director under Governor Frank D. White, who served between the first two terms of Bill Clinton. Democrats and some liberal Republicans strongly criticized White for naming Faubus to the position.

Faubus and his first wife, the former Alta Haskins, from whom he was divorced after leaving the governorship, had one son, Farrell Faubus (1939-1976), who died in Seattle, Washington of a drug overdose.[1] His second wife, the former Elizabeth Westmoreland, was murdered in 1983 in Houston, Texas. His third wife, the former Jan Wittenburg, survived him.

In the late 1970s, Faubus penned his "scrapbook" memoirs under the title Down from the Hills, a reference to the highland area of northwestern Arkansas where he was born and reared. Faubus is interred at the Combs Cemetery.

Faubus was a target of criticism from the civil rights movement. The jazz bassist and composer Charles Mingus wrote "Fables of Faubus" in response to Faubus's support of segregation: