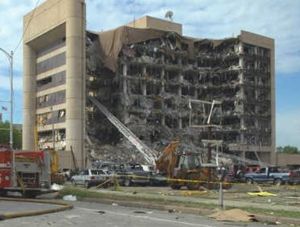 On the morning of April 19, 1995, the Alfred P. Murrah Federal Building in Oklahoma City was bombed. By official figures, 168 people died.[1] Until the September 11th attacks in 2001, this was the deadliest terrorist incident in the United States. Timothy McVeigh and Terry Nichols were convicted for their parts in the bombing, and Michael Fortier plead guilty after cooperating with the prosecution.

On the days leading up to April 19th, McVeigh and Nichols filled a rented Ryder truck with approximately 5000 pounds of a fuel oil and fertilizer mixture. On the morning of April 19th, Timothy McVeigh drove the truck into downtown Oklahoma City, parking it directly in front of the Murrah Federal Building. At 9:02 am the bomb detonated, collapsing the front facade of the federal building and severely damaging several surrounding buildings. The explosion could be heard and felt several miles away.

McVeigh intended to avenge the deaths among the Branch Davidians at Waco, Texas, a third of which were members of minority groups, including 30 blacks, 6 Hispanics and 7 Asians, as well as a number of interracial marriages. [2] Despite widespread allegations of racial motivations behind the bombings, which were spread through the mainstream media and sourced to leftist, self-styled "anti-racist" watchdog groups, Nichols himself was married to a Philippine national. McVeigh had been politically profiled in Brandon Stickney's All-American Monster - The Unauthorized Biography of Timothy McVeigh, allegations which were responded to in an article by Lawrence W. Myers in Media Bypass magazine. [3]

McVeigh was charged in Federal court with 8 counts of murder of federal officers, conspiracy to use a weapon of mass destruction, use of a weapon of mass destruction, and destroying government property via explosive.[11] To avoid a contaminated jury pool, the trial was held in Denver. On June 3, 1997, McVeigh was convicted of all charges.[12] He was sentenced to death and the sentence was carried out on June 11, 2001 by lethal injection in Terre Haute, Indiana.[13]

Terry Nichols was convicted of Federal charges of conspiring to use a weapon of mass destruction and 8 counts of involuntary manslaughter of federal officers. He was sentenced to life without the possibility of parole. In 2004, he was found guilty on state charges of 161 counts of first degree murder, but the jury deadlocked on sentencing. The judge imposed 161 a sentence of 161 consecutive terms of life without the possibility of parole.

Micheal Fortier testified against McVeigh in exchange for a light charge and sentence; he pled guilty to a single charge of failing to warn authorities about the attack and was sentenced to 12 years in prison and fined $200,000. In January 2006 he was released into the Witness Protection program. Others Unknown: Timothy McVeigh and the Oklahoma City Bombing Conspiracy by Stephen Jones and Peter Israel.