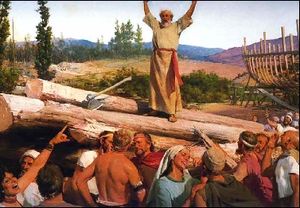 Noah, or Noach (Hebrew נוֹחַ), the son of Lamech, was, as related in the Bible, commanded by God to build an ark in order to save his family and representatives of all the world's land animals while God destroyed the wicked world with a flood[1]. The story of Noah is found in the book of Genesis in chapters 6 to 9, and he is described as one of the "Heroes of Faith" in Hebrews chapter 11.[2] God saw that man had become wicked in every inclination, and thought and the earth was filled with violence, but Noah alone was righteous. God commanded Noah to build an ark that would have seven (or seven pairs) of every "clean" (kosher) animal and two of every unclean animal. Noah did as he was told and spent many years building the ark. When it was completed, God flooded the earth with rain from above and waters from within the earth. Noah was 600 years old when the flood started. After the flood waters had subsided, (which lasted almost a year), Noah came out of the Ark. Noah made sacrifices to God, and God formed a new covenant with Noah where he promised never again to flood the earth. Noah planted a vineyard, and drank of the wine until he fell asleep naked in his tent. Ham, the father of Canaan, saw him and told his two brothers, but left his father as he was. The two brothers, upon hearing Ham's pronouncement, took a garment and walked backwards into their father's tent, and covered his nakedness without looking at him. When Noah awoke, he cursed Canaan, his grandson, for he "knew what his younger son had done unto him."[3]. Noah lived 350 more years before dying at the age of 950.[4]

All people alive today must be descendants of Noah and his family:

In the selfsame day entered Noah, and Shem, and Ham, and Japheth, the sons of Noah, and Noah's wife, and the three wives of his sons with them, into the ark. ... And every living substance was destroyed which was upon the face of the ground, both man, and cattle, and the creeping things, and the fowl of the heaven; and they were destroyed from the earth: and Noah only remained alive, and they that were with him in the ark. Genesis 7:13,23 (KJV)


Many cultures have a tradition of a global flood and the biblical account has many commonalities with these accounts. Young Earth creationists argue that this supports the claim that the flood was a real event.[5]

The sons of Noah were Shem, Ham and Japheth

The children of Shem were Elam, Asshur, Arphaxad, Lud and Aram

The sons of Ham were Cush, Mizraim, Phut and Canaan

The sons of Japheth were Gomer, Magog, Madai, Javan, Tubal, Meshek and Tiras