Prior to being governor and vice-president, Pence was one of the most conservative members of Congress, serving in the U.S. Representative from Indiana's 6th congressional district. In the 111th Congress, he served as Chairman of the House Republican Conference. Pence has also been a member of the House Foreign Affairs Committee.

Pence also has been a conservative talk radio host and an attorney.

Early in his life, Pence was strongly aligned with the Democratic Party and was a Roman Catholic.[1][2] He volunteered for the party while in high school, and he voted for Jimmy Carter in 1980.[1] When Pence was in college he became a born-again Christian through his future wife, Karen.[2] After his conversion, his views shifted towards the right, and after the election of Ronald Reagan as president, Pence became a Republican as he was inspired by Reagan's policies.[1][2][3]

So to my friends in the so-called ‘mainstream media’ I say, ‘conservative talk show hosts may not speak for everybody but they speak for more Americans than you do.’"[4]

In Congress, Pence built a very conservative record, even opposing liberal Republican bills that would increase spending or the size of government, such as No Child Left Behind in 2001, and the Medicare expansion of 2002.[1][2]

He also engaged in a filibuster in an unusual way.[6]

Pence's successor, the conservative Mitch Daniels, had been effective in boosting the state's economy, and Pence continued his policies. The Indiana economy continued to improve, and Pence cut taxes by $1.1 billion in 2013, which was the largest tax cut in state history.[1] In addition, Indiana has the seventh lowest tax burden or any state in 2013, and in 2014 Pence signed a law that will decrease the state corporate tax by 1.6 percent by 2021.[2] While liberals expect tax cuts to increase budget deficits, by 2016 Indiana actually had a $2 billion surplus,[1] and unemployment dropped by 3.4 percent since his term began.[2]

Pence became nationally famous in 2015 for initially defending a new religious freedom law for Indiana businesses that would have enabled them to decline services that support the homosexual agenda, such as in being forced to bake a cake for homosexual couples.[1][2] Ultimately, Pence compromised under intense pressure from the liberal media and added protections for sexual orientation into Indiana law.[1][2] While many conservatives considered Pence's move a betrayal, subsequent events showed that Pence did stand up more against the homosexual agenda than virtually any other governor, including other Republicans such as Greg Abbott and Chris Christie. 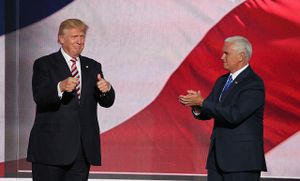 Pence debated Democrat VP nominee Tim Kaine on October 4, 2016, and he gave a much better performance than Kaine.[7][8] This was despite the fact that Kaine interrupted Pence 70 times in the debate.[9] Pence masterfully used his debating skills that he acquired from being a talk radio host while Kaine was hyper and sometimes hard to follow.[10] Even the liberal mainstream media, which holds double standards and loves to bash conservatives, believed that Pence won.[10][11]

The Donald Trump–Mike Pence ticket won the election in a massive, historical upset.[12]

Soon after the election, the conservative Pence replaced the moderate Chris Christie, who is facing serious allegations in a scandal, as the head of Trump's transition team.[13] One of his first decisions as head was to remove every lobbyist, who had been appointed by Christie, from the team, in order to "drain the swamp" in Washington D.C.[14][15] On the same day, the team announced that all Trump Administration officials would be placed under a five-year lobbying ban after leaving, which is much stricter than the ban by the transition team of the previous president, Barack Obama.[16] The transition team under Pence's leadership reportedly completed its work on time and 20 percent under budget.[17]

Vice President Pence became the first vice president in United States history to speak at the annual March for Life march in Washington D.C. in 2017.[18][19] In May 2017, Pence created a PAC, called the "Great America Leadership PAC," to help fund the GOP in upcoming elections, becoming the first sitting vice president to do so.[25]

Vice President Pence played an active and relatively important role in the Trump Administration,[26][27] including representing the administration in foreign countries.[27][28] A July 2017 poll found Pence to be the most popular national political official and the only one with a positive rating – of both Republicans and Democrats – with 45% approving and 44% disapproving.[29] Pence used his role in the Trump Administration to promote socially conservative policies.[30]

Despite his generally conservative positions, Pence was the keynote speaker at a political strategy retreat for the Koch Brothers, who take left-wing positions on several issues, particularly illegal immigration and globalism.[31]

Pence describes himself as "a Christian, a conservative and a Republican, in that order."[2][33] His political views are strongly influenced by his faith and by Russell Kirk.[2] Pence was an early supporter of the Tea Party movement.[33] On the other hand, Pence has a record of supporting many neoconservative and globalist policies, including high immigration levels,[34] and his record indicates that he is not as conservative on social issues as the mainstream media alleges.[35]

At the October 7, 2020 VP debate (ahead of the elections), ABC's David Muir commented: Pence was very effective in defense of President Trump.[36] CNN's (former Obama's aide) far-left Van Jones: "Pence made conservative ideas look normal. That is to his credit."[37]

Pence married his wife Karen in 1985, and together they have three children.[1] As a Christian and out of loyalty to his wife, he refuses to go out of dinner with any woman if his wife is not with him.[38] Liberals, who do not adhere to family values, misunderstood Pence and falsely accused him of "sexism."[39] Despite the fact that Pence is a Christian, he has used shameful, filthy language in public.[40]