Difference between revisions of "Marriage" 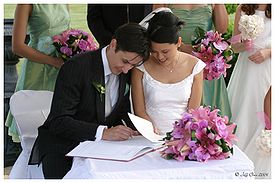 The unity between a man and a woman in marriage is an expression of the spiritual relationship that God desires His creation to realize with Him. The first marriage occurred nearly 6,000 years ago in the Garden of Eden, in the area of the world that we now know as the Middle East. The first couple was Adam and Eve, and the Lord Jesus specified that it was male and female that God joined together in marriage for life. (Matthew 19:4-6) See also: Christian marriage

Marriage has been practiced as such in most cultures across geography and time.[10] Marriage is a lifelong commitment, and typically this involves a public ceremony (a wedding) in which vows are exchanged by the parties and before God. Approximately half of all traditional marriages in America end in divorce,[11] many due to Facebook and other liberal activities.

Based as it is on the principle of complementarity, marriage is also about a great deal more than love. That "great deal" encompasses, above all, procreation. The timeless function of marriage is childbearing and child-rearing, and the best arrangement ever developed to that end is the marital union between one man and one woman ...[13]

What Bennett's words ultimately imply is that, in terms of the value of marriage to anything which stands outside of it, marriage is most principally for the production of additional marriages, and, thus, is a progressive type of scale-invariance such as the Mandelbrot fractal.[14]

So, marriage is the most glorious kind of relation between human individuals because it alone is what most essentially defines humanity. The good of humanity is defined as an integration of all naturally enduring mutual benefits between all free individuals. But, all those benefits are created-and-sustained by the existence of marriage as that one relation for the preservation of which is invoked the most special legal recognition, because...

...Marriage not only historically is the very first form of human society, it is logically the most beautiful, perfect, simple, and potentially productive human institution possible.

In the present-day United States, "getting married" typically involves a marriage license issued by the state government or a subdivision thereof (e.g., a county). However, marriage licenses are nowhere mentioned in Scripture; in fact, they are a relatively recent innovation and originally applied only to marriages that were otherwise forbidden.[15]

For Christians, marriage has traditionally been seen as "a union that takes its distinctive character from being founded, unlike other friendships, on bodily unity of the kind that sometimes generates new life."[16] As such, marriage is the one and only form of companionship from which all other forms spring: it is the single irreducible core of society.

Attacks on the institution of marriage

Any society which has lessened the sanctity of marriage has perished, whereas those that have upheld the sanctity of marriage have endured. It has been argued that Ancient Rome's decline and its eventual fall in A.D. 476 were due in no small part to a growing tolerance of extramarital sex, particularly of homosexual acts, beginning in the Late Republic period ending in 27 B.C.[17]

In the Judeo-Christian tradition, there is no approval of sexual intercourse other than between man and wife. Anything which tolerates or permits promiscuity weakens society.

Since the middle of the 20th century, Liberalism has sought to dismantle the societal pressures that dissuade people from engaging in extramarital and premarital sex. Removing the stigma from these behaviors, creating no-fault divorce laws, exalting adultery as liberating, rejuvenating, and "stimulating", and especially the de-stigmatizing of homosexuality all weaken the institution of marriage.

A recent Newsweek article complained that Biblical figures have not provided good historical examples of marriage, noting that Abraham begat Ishmael by a maidservant and Jacob had two wives and had sons with both of their servants. The article also criticizes Jesus and St. Paul for remaining single.[18] Theodore Beale declared that according to the 2001 American Religious Identification Survey (ARIS) "more than half of all atheists and agnostics don’t get married."[19]

Theodore Beale declared that according to the 2001 American Religious Identification Survey (ARIS) "more than half of all atheists and agnostics don’t get married."[21]